Suburban subsidies created trillions of dollars of infrastructure that can't pay for itself.

The sorry state of America’s infrastructure is impossible to escape. People experience it every day on their commute to work, and they hear it referenced in stump speeches and read studies about it online or in newspapers. The scale of the crisis is vast.

The American Board of Civil Engineers, which gave US infrastructure a D+ in its latest report, estimates that merely getting America’s roads, bridges, highways and railways to decent working order (which would net a B grade), would require nearly 5 trillion dollars of expenditure. Trump’s increasingly fleeting trillion-dollar infrastructure promise would barely scratch the surface.

But few people are aware how this predicament developed. Ask a friend or neighbor and they’re liable to blame incompetent government officials, insufficient taxation, or some other plausible but incorrect explanation.

The true cause is housing. 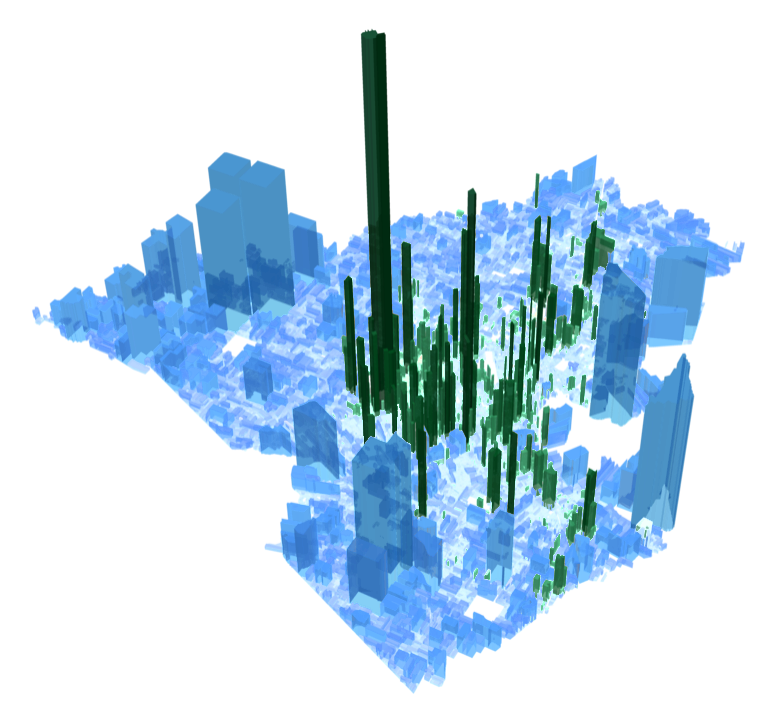 This is a map of Lafayette, a small city in Louisiana. It’s a typical American city, with a population of 125,000 and a median income of $41,000 and tells a typical American story repeated in thousands of communities across the country. This map (created by Charles Marohn) records the revenue produced and infrastructure expenses incurred by every block of the city, then subtracts one from the other.

The implications are startling. The city’s small urban core (the green peaks in the center of the map) generates an immense profit, which is promptly gobbled up by the suburbs (the blue peaks). However, this depiction is not entirely accurate. Suburbs actually consume far more than city centers can provide.

The “replacement cost” of the city’s infrastructure, an expense expected to be incurred at least once a generation, comes out to $32 billion. Lafayette's tax base, the entire wealth of its citizenry, comes out to a mere 16 billion dollars. In order to sustain what’s extant, not to build anything new, the local tax burden of the average citizen would have to rise from $1,500 to $9,300 annually. It’s not surprise then why so many American cities have gone bankrupt.

Ending up with a five-trillion-dollar national infrastructure funding gap does not require too many cities with predicaments like Lafayette. We have vast quantities of infrastructure which can’t pay for themselves.

The FHA Comes to (Remake the) Town

The “why” of this equation is relatively simple. City centers have a high density of productive industries—businesses, shops, offices, and apartment buildings. The infrastructure necessary to sustain an urban center is comparatively miniscule. Walking and biking put a negligible amount of wear on roads and sidewalks, while buses and trains move lots of people for little cost.

Suburbs are exactly the opposite. Vast expanses of low-density, low-productivity, low-population single family homes and strip malls are supported by the vast amount of infrastructure required to sustain an automobile-focused lifestyle (with its parking lots, highways, thousands of miles of asphalt roads, etc.).

The “how” of this equation is more complicated and requires some history. If we go back a century most city-bound Americans lived lifestyles similar those of the people who reside in downtown Lafayette today (because that’s when the urban core of Lafayette was built): in an apartment or townhome, walking, biking or taking mass transit to work, rather than driving for miles.

This model changed with the Great Depression. As a part of the New Deal, the Roosevelt Administration thrust the federal government into the housing market, a regulatory role it had previously avoided.

In 1934 the Federal Housing Authority was created. While the FHA did not hand out money directly, it did insure loans, taking on the risk of the loan in exchange for banks offering lower rates. This form of indirect subsidy enabled lenders to hand out much longer loans with significantly lower rates, transforming the previously short-duration, small-quantity industry into one where multi-million-dollar, thirty-year-long mortgages are the norm.

In the name of “minimizing risk” the FHA created a set of extremely strict standards for the kinds of developments that would be eligible for insured loans. These standards were heavily skewed in favor of suburban development: wide, curving streets, low population density, separation of uses, detached single-family homes, and no minorities. In a process called “redlining,” neighborhoods which did not meet these criteria were systematically excluded from access to government-backed loans. 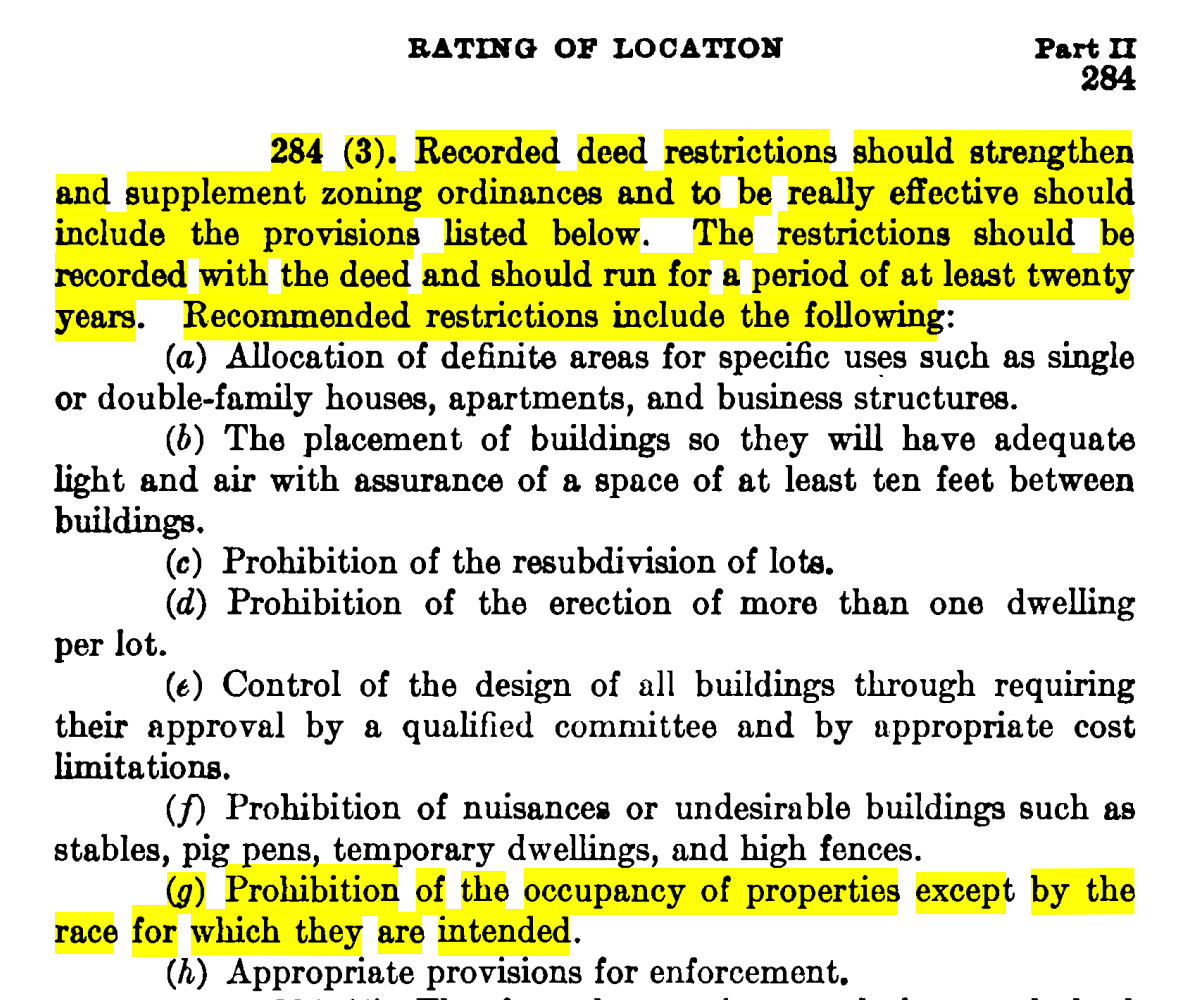 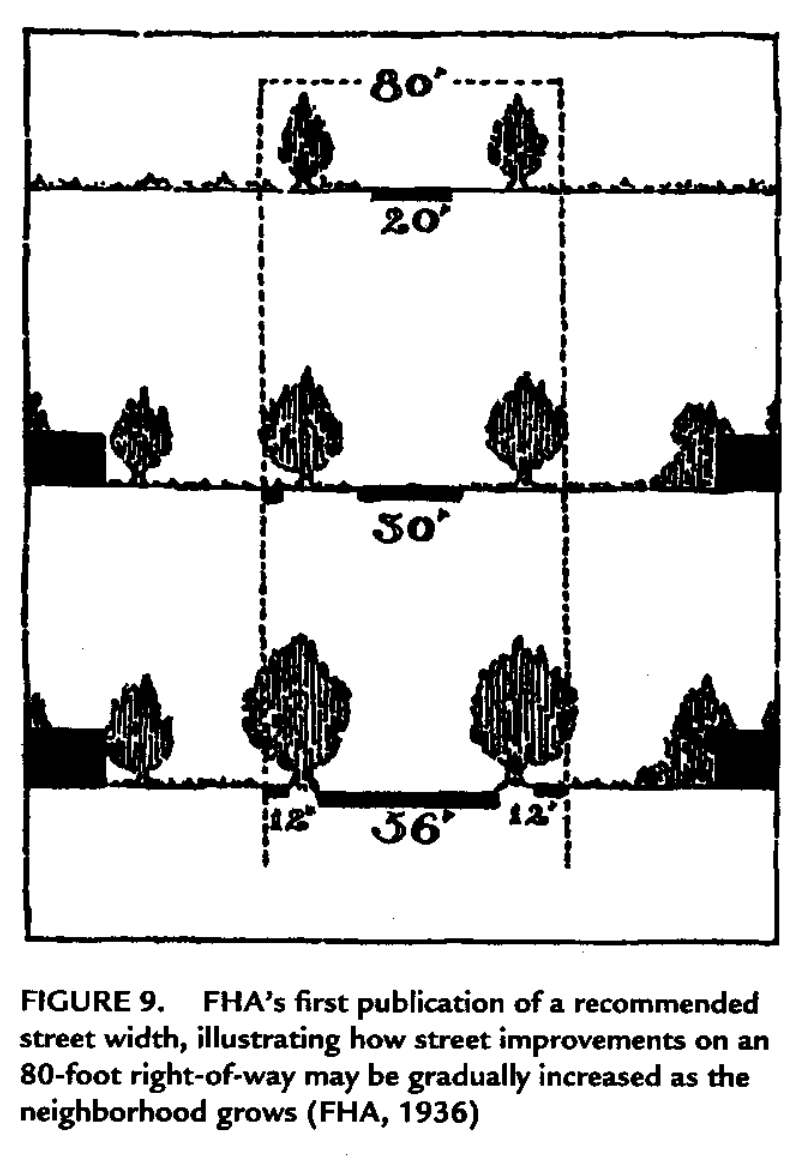 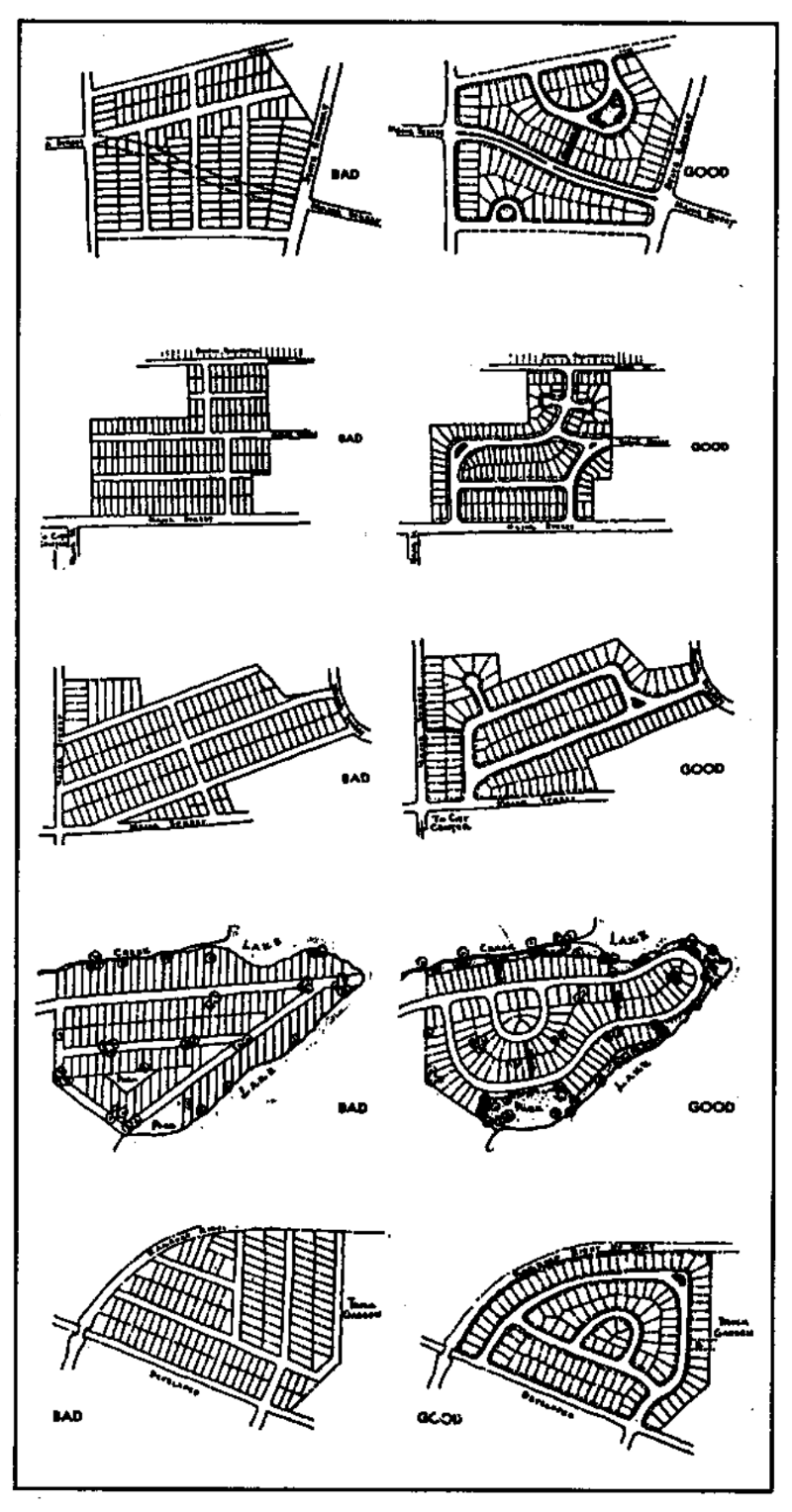 If you lived above a shop, or in a neighborhood with too much commercial development, or in an area above a certain density, or a place with too much foot traffic—or if you simply had a grocery store close by—the FHA would exclude you from the market.

The end of the Great Depression, instead of scaling back the federal government's role in promoting suburbanization, simply amplified it.

In 1944 President Franklin Roosevelt signed the GI Bill. Among its many elements was a provision to offer directly subsidized loans to millions of returning veterans. In 1956, in response to the increasing difficult involved in moving millions of newly car-dependent Americans to work everyday, President  Eisenhower signed the Federal Aid Highway act, establishing a system of free interstates.

Eager to access cheap government-backed capital, states and localities quickly conformed to the FHA’s diktats, building vast quantities of auto-focused infrastructure. In extreme cases, up to 60 percent of the land area of cities was devoted to streets and parking spaces.

Private rail companies—suffering from decades of underinvestment because of the Depression and war—quickly collapsed, unable to compete with a free highway system, the construction of which necessitated the leveling of dozens of dense, transit-oriented neighborhoods.

The poor decisions of cities themselves added fuel to the fire, rent control rotting out what rental housing stock still remained. These pieces of legislation ultimately precipitated one of the biggest social shifts in American history, driving millions to newly minted and heavily subsidized suburbs.

This heavy regime of subsidization served to insulate people to the true cost of their new suburban lifestyle. An unsustainable way of living was made to seem sustainable by government policy. Now the bill is finally coming due in the form of the infrastructure crisis.

While the influence of the FHA has waned, pro-suburban policies continue to this day. America remains the most suburbanized nation on the planet. Drivers continue to pay for less than 50 percent of their own costs. The government spends over $70 billion a year on subsidizing mortgages through the mortgage interest deduction. Trillions of dollars are still wasted by state, local and federal government agencies on car-centric infrastructure that has no hope of ever paying for itself.

The plight of cities like Lafayette, or the severity of America’s five-trillion-dollar infrastructure funding gap, should not come as a surprise to anyone. They were inevitable from the moment the federal government made the fateful decision to subsidize suburban, auto-dependent living.

Municipal bankruptcy and crumbling infrastructure are not the only problems which trace their genesis back to faulty housing policy. Slowing growth, rising inequality, the stubbornness of the racial divide, the warming of our planet and many other critical issues facing our country make up the pantheon of problems driven by housing. The next entry in this series addresses how the artificial scarcity of housing in major urban areas has driven the expansion of both wealth inequality and income inequality.

Commemorating John Lewis at the Capitol

Coronavirus Deaths in our State Legislatures

A Priest – and a Congressman – Walks into a Bar: the Electoral History of Rep. Robert Drinan