The debate surrounding America’s rising inequality is a sour one. It’s more likely than not that you either don’t think inequality is a problem or—if you are concerned with its rapid rise—you’ve misidentified its source.

Neither is an unintelligent position to hold, but both are wrong and counterproductive to the goal of an equal society, the true barrier to which is housing.

Opponents of inequality, when asked about its cause, are quick to point to the economic policies of recent decades, most notably the Reagan-era tax cuts. Many will draw a connection between the high-on-paper taxes of the mid-20th century, which approached 90 percent for some upper brackets, and the relative equity of that era.

Once again this is not an unreasonable assumption to make; inequality did start to rise in the 1990s, not long after the Reagan tax cuts. However it is an incorrect assumption, not least because Reagan didn’t actually cut taxes all that much.

The Tax Cuts That Never Were

Below is a graph of federal tax receipts as percentage of GDP. You will notice that the percentage of the economy scooped up by the federal government since the Second World War is relatively constant, somewhere between 16 and 20 percent (a phenomenon called Hauser’s Law). This didn’t change during or after the Reagan years. In fact, taxes have risen since the 1980s, because while federal revenue has stayed constant, state and local taxes (which are not included in the chart) have continued to rise. 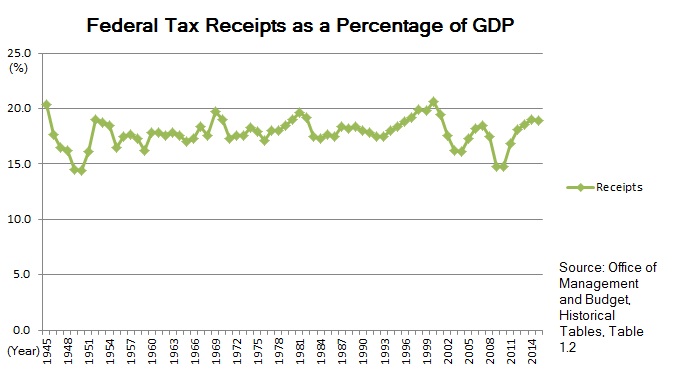 Some may be tempted to respond with the claim that while taxes as a whole may have stayed constant (or risen), the burden has shifted from rich to poor. But that’s also incorrect.

Yes, top marginal rates in the 1950s were 90 percent. But what people actually paid—the effective rate—was far lower. In the words of Joshua Kennon, “the effective tax rates during the 1950s weren’t terribly oppressive because the loopholes were staggeringly large back then.”

Between 1942 and 1954, you could exclude 50 percent of capital gains from stocks and bonds, provided you held the position for only six months. Benefits (such as healthcare and corporate cars) were not treated as income. You could incorporate your professional practice as a corporation, which had much lower rates. You could deduct personal interest expense on luxury purchases.

The implication of this is that the story of mid-century tax reforms, initiated by JFK and culminating with Reagan, was largely about eliminating loopholes and bringing marginal rates more in line with what people actually paid. A (quickly reversed) 3 percent fall in federal tax receipts is not much of a talking point.

In the years since the 1980s, the scale of mid-century tax reform has been played up by conservative politicians, maybe in an attempt to show that the Reagan Revolution was truly revolutionary, rather than simply the continuation of a process initiated 20 years earlier by a Democratic administration.

I know this because this was my stance in response to the crisis of inequality for a long time. The problem gnawed at the back of my mind for years, but I rejected it because I feared what activists claimed was necessary in order to fix it. Understanding inequality’s relation to housing policy allowed me to change my views.

Understanding the central role that housing plays in driving inequality is therefore of the utmost importance to egalitarians who wish to fight it. The fact that punitive taxes are not necessarily needed for an equal society is likely to coax anti-redistributionists into the fold.

Housing has driven the crisis of inequality from two sides. The housing shortage has made incumbent property owners rich, driving wealth inequality, and has impeded the labor mobility of the middle and working classes, boosting income inequality.

The crisis of inequality received a burst of attention in 2014, when Thomas Piketty published Capital in the Twenty-First Century. The French economist argued that the rate of return on wealth generally exceeds economic growth (summed up in the equation r > g). Inequality rises as this relationship compounds over time, creating an increase in the share of national income going to those who own capital (the rich), and a decline in the portion going to labor (everyone else).

With mountains of empirical backing, Capital became a bestseller and moved 1.5 million copies in a year. Anti-inequality advocates the world over sang its praises and emphasized its proposed solution: a global tax on wealth.

A year later Matthew Rognlie published his critique, which disputed Piketty’s notion that his dynamic was inherent to capitalism and sought instead to pinpoint the elements of the economy driving the rise in capital’s share of income.

Ultimately, Rognlie observed that housing was the main driver of the effect Piketty had described. Furthermore, he deduced that when housing wealth is removed from the inequality equation, there has been no major increase in wealth stratification.

How is this possible? It’s actually quite simple.

In the 60s, 70s and 80s, property in urban areas was dirt cheap, with the core of most cities emptied out by the suburban subsidies and free highways explored in entry two of this series. In the 90s this trend reversed and Americans started returning to cities.

However, most urban centers found themselves incapable of resuming property development, since new construction was constrained by a raft of political interests and bad government policy. The shortage of the urban housing supply (explored in the first entry in this series) spiked the price of housing and land in cities.

Those developers and landowners lucky enough to scoop up reams of dirt-cheap urban property in the 60s, 70s and 80s have since become extremely wealthy. They were at the right place at the right time and are now rich for basically doing nothing. So rich, in fact, that they are distorting the wealth inequality metrics of the entire nation. 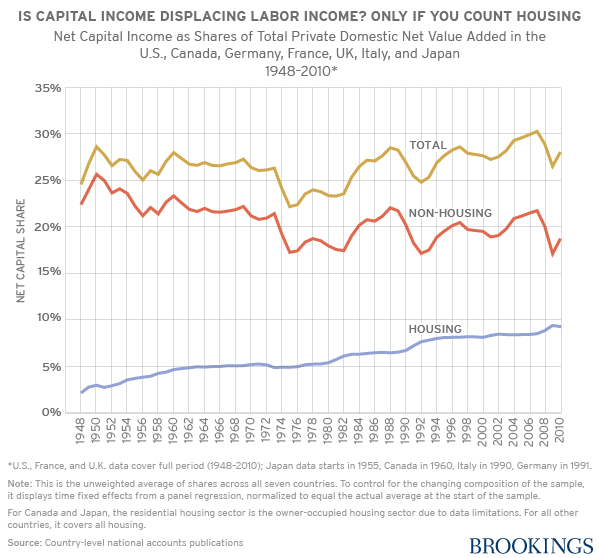 Housing has also influenced the other end of the spectrum: income inequality. A central concept in the first entry of this series was that high housing costs in urban areas create a misallocation of labor. In that entry I treated the labor supply rather uniformly for the sake of simplicity.

In reality, the misallocation of labor is slanted across class. Poor people are more affected by it, rich people less. Highly educated people continue to move to high-productivity areas, but exorbitant housing costs in the job-rich cities make it difficult for anyone else to do so.

So, while a high-productivity job in New York may pay you far more than your lower-productivity job in Dallas, you will actually see your living standards actively decline if you move to New York, the cost of housing literally eating through your wage gains.

As a result not as many people have been moving to cities as should be, leading to a disconnect between where people are and where jobs are, which in turn saps economic growth.

This effect is most acute for low and middle-income people. Moving to a wealthier area results in a roughly equal wage gain across income levels. Moving to New York will boost a worker’s income by around 100 percent whether they are a lawyer or a janitor.

With this in mind, it becomes easy to see how high housing prices can make moving to a city a losing bargain for the poor and middle class, but a winning one for the rich. The average wealthy person spends a quarter or less of their income on housing. A doubling of their already high income is more than enough to cover the tripling or quadrupling of housing costs they incur when they move to New York or San Francisco.

For poor people, the rise in housing costs easily outstrips their wage gains. Housing in expensive cities can consume over 60 percent of the income of low and middle-income households. A doubling of their lower income is not enough to cover the higher housing costs. As a result, poor people are not only failing to move to job-rich cities, they are actually actively moving away from them.

This can be demonstrated with a little bit of arithmetic. Say I have an annual income of $8 and spend two dollars on housing, leaving me with six dollars after rent is paid. If I move to New York City, I will earn sixteen dollars and spend six dollars on housing, leading to a four-dollar rise in my income minus housing costs, a winning proposition. However, if I have an annual income of $1.60 and spend one dollar on housing, moving to NYC will leave me with less money at the end of the month: my income increases to $3.20 but my housing costs rise to $3.00, so my income minus housing decreases by $0.40. Getting a better paying job has actually made me poorer.

The result has been a massive rise in class stratification. Richer people are free to move to our most productive cities and take advantage of the better jobs and education they offer. Poor people are forced to move to less productive areas and stay poorer.

Furthermore, the fall of labor mobility in lower income brackets has tipped the balance of power in favor of employers. One of the main mechanisms by which employees can put pressure on their bosses is by threatening to quit and find another, better paying job with a competitor. Because so much of the job market is locked up behind high housing costs, the workers are less able to say “screw you, I quit.” As a result, there is less competition between companies for labor and employers are able to drive much harder bargains, pushing down wages and driving up profits.

Inequality is a dire crisis. Our country is rapidly approaching near-record levels of social stratification. However, unless we recognize its true cause—housing—progress in the quest for a more equal society will be fleeting.

The next entry in this series will explore housing’s influence on another kind of inequality: race. Through a diverse range of mechanisms, housing has conspired to maintain the racial divide which was abolished on paper fifty years ago.

The Coronavirus and Iran's Political Reckoning

One Man, No Vote: How Native Americans in North Dakota Lost the Right to Vote and Fought for Its Return