You’re wrong about growth. While most recognize that economic expansion has slowed to an unprecedentedly sluggish pace in the United States—ten years below three percent, the longest such stretch by a long shot—rare is the person who understands what’s truly been causing it.

I don’t blame you if you believe that greedy bankers, high taxes, regulatory capture, or some combination of all three are the primary afflictions holding our economy back. Though there’s some truth in each, especially the latter two, in fact such misconceptions are merely a sign that you are in tune with the political zeitgeist.

For years the causes of the economic slowdown mystified most. While most economists agree that economic growth is ultimately dependent on improving the productive capacity per worker, there is wide disagreement about what exactly has caused productivity to stagnate after over a century of consistent improvement.

Politicians and pundits exploited this gap in understanding, and the public’s natural urge for answers, to push their own narratives and score political points. As a result, what little insight was to be had for academics has been lost in a sea of political finger-pointing.

But now a new wave of research, much of it emerging from the University of Chicago, is pointing to an entirely different slow growth culprit, something once considered a minor part of the political picture: housing.

America’s dire housing shortage has largely gone unnoticed in the national discourse, and those few who do see fit to mention it have largely focused on the skyrocketing housing prices in big cities, mostly viewing it as a local issue.

This changed in May of 2017, as two economists, Enrico Moretti of UC Berkeley and Chang-Tai Hsieh of the University of Chicago, published a breakthrough paper which lent credence to a theory that past work has only hinted at: the housing shortage is not merely jacking up local housing prices, it is sapping away our national economic vitality.

By their estimation, if just three cities (New York, San Jose and San Francisco) had the zoning of a median American city, the economy of the United States would be 10 percent larger, and, even more shocking, constraints on housing development “lowered aggregate US growth by more than 50% from 1964 to 2009.”

How on earth is an ostensibly local issue like housing cause a national crisis? The answer: labor, or, more specifically, its misallocation.

As for most things, there is a market for labor, governed by supply and demand. Traditionally America has been an extremely geographically mobile nation, with rural residents easily migrating to eastern urban centers and western frontier towns. This ease of mobility was a source of great economic strength, since it facilitated a (comparatively) efficient labor market, with supply easily meeting demand. Local housing, population and economic growth moved in lockstep—a city’s new arrivals would be greeted by developers with new accommodations and infrastructure.

Combined with the fact that two thirds of job growth since the Great Recession has been concentrated in a handful of cities, the result is a dire mismatch of where jobs are and where people are. Today new jobs outnumber new homes 3.4 to one in the New York metropolitan area, 4.3 to one in San Diego, 4.7 to one in Los Angeles, 4.9 to one in San Jose and an astonishing 6.4 to one in San Francisco.

This misallocation of labor has had dire economic effects. Firms are increasingly unable to properly fill open positions, while unemployed people in rural areas are barred from the new urban jobs they’d traditionally have migrated to. Urban housing is so expensive that relocating to a city for a much better paying job can actually result in a decrease in take-home income, as higher housing costs literally eat through any wage gain and more.

The result has been a stark shift in migration patterns. Geographic mobility is the lowest it has ever been in American history. Since 1980, the percentage of households relocating from one state to another has fallen by more than half, from 3.5 to 1.7 percent.

Furthermore, the kinds of places Americans move to has changed as well. Unlike past migrations, where Americans moved to job centers and opportunity rich areas, the ongoing migration to the Sunbelt has been driven by the availability of cheap housing. For the first time ever, Americans are actively moving away from opportunity-rich areas and to low-productivity but housing-rich regions. 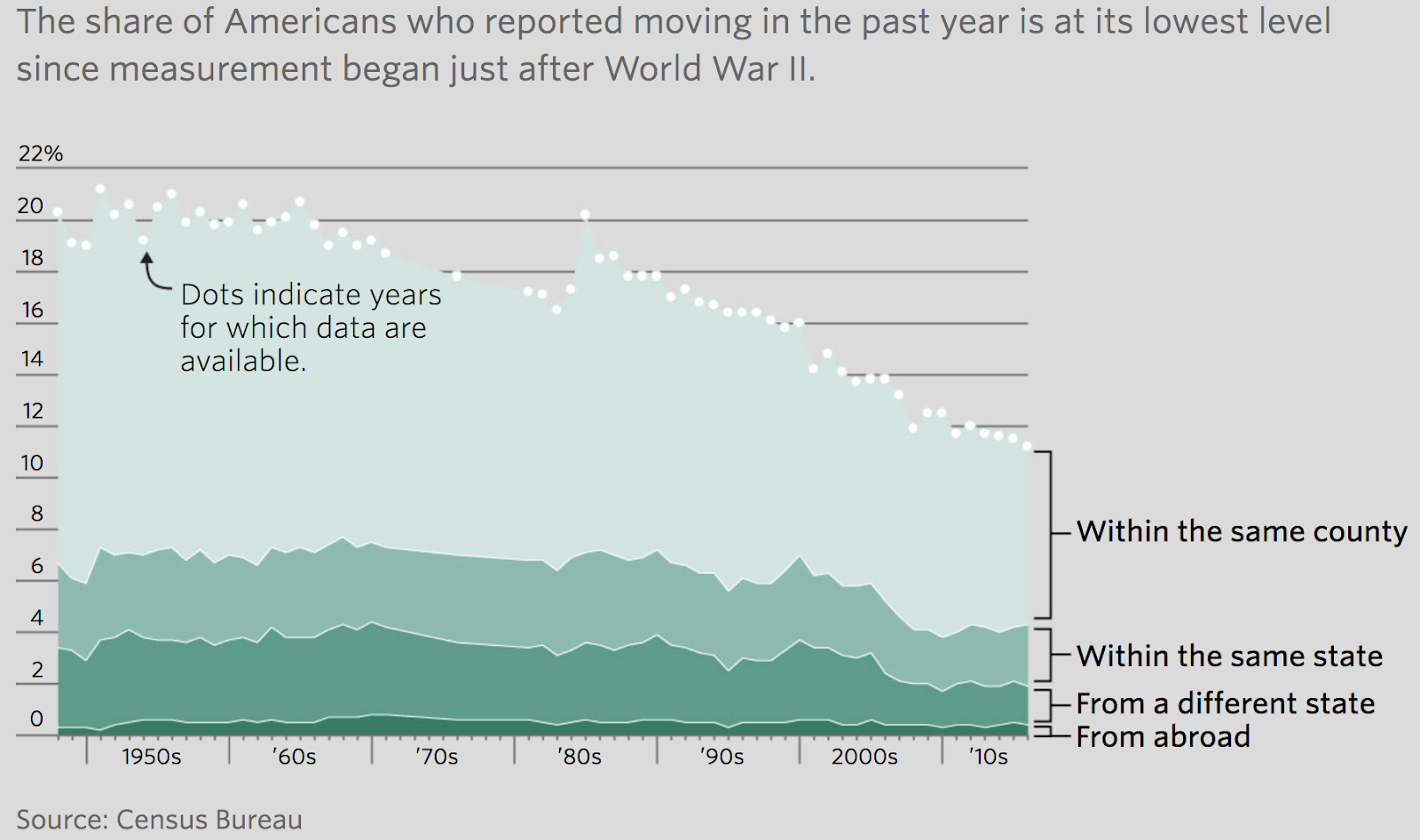 Removing the restrictions currently suppressing housing supply—and thereby allowing workers in low-productivity areas to migrate to cities once more—would result in a windfall of nearly $9,000 per worker per year, an astoundingly large increase, especially given the fact that much of the working class is currently living paycheck to paycheck.

Housing is the Cause of Almost All Our Problems

Slow growth isn’t the only problem being caused by housing. Crumbling infrastructure, municipal bankruptcy, rising wealth inequality and income inequality, the stubbornness of the racial divide, the warming of our planet, the falling of birth rates and the explosion of obesity—nearly every major challenge facing our nation—has been caused or greatly amplified by the destructive combination of unsustainable suburban subsidies and a repressed urban housing supply. Each one of these concerns will be addressed in as part of an ongoing series about housing and its impact on our country. Part 2, on infrastructure, can be found here.

Commemorating John Lewis at the Capitol

Coronavirus Deaths in our State Legislatures

A Priest – and a Congressman – Walks into a Bar: the Electoral History of Rep. Robert Drinan