On Tuesday, January 28, President Donald Trump revealed his peace plan for Israel-Palestine. Instantly rejected by the Palestinians, the plan stops short of the full two-state solution that politicians on both sides of the aisle have been promising for decades. Instead, it grants Israel land in all of the areas it has been seeking to control for years, and it creates a quasi-sovereign demilitarized Palestinian state under the nominal security control of Israel.

Leading up to the announcement of the new plan, Trump invited Israeli Prime Minister Benjamin Netanyahu and leading opposition figure Benny Gantz to the White House. President Mahmoud Abbas of the Palestinian Authority was not invited. Netanyahu and Gantz both hailed the peace plan, with Gantz calling it “historic” and Netanyahu lauding Trump as a great friend of Israel. The plan comes as Gantz and Netanyahu approach a third consecutive election, unprecedented in Israeli politics. Neither has been able to secure a victory strong enough to create a working government, and polls suggest that the impending election will be no different in its inconclusiveness.

The peace plan comes as Netanyahu and Trump both face serious domestic challenges. Trump has been impeached by the House of Representatives, and has faced trial in the Senate. Netanyahu was formally indicted on three criminal counts when he withdrew his doomed request for parliamentary immunity from prosecution. Netanyahu has been accused of bribing media entities for positive coverage of himself and his family, and for negative coverage of his opponents. The peace plan functions as a distraction from both leaders’ political challenges, rather than a tool to make real progress towards peace.

Trump tweeted a map of his proposed borders for Israel and Palestine (reproduced below). 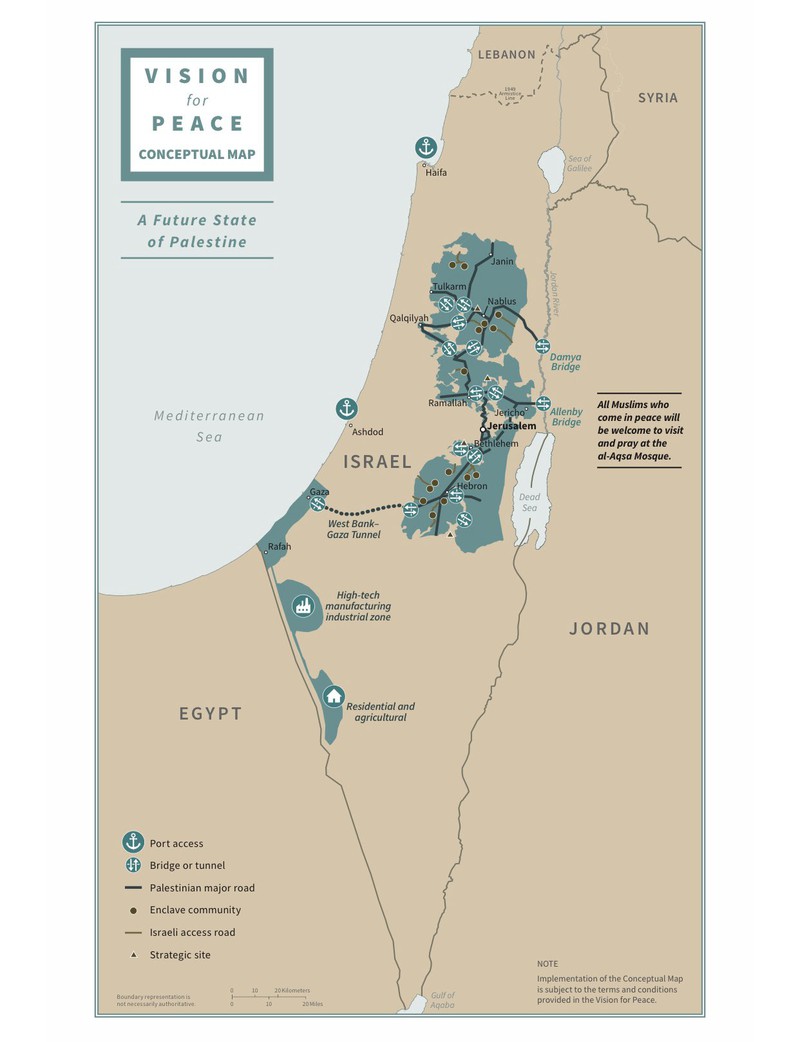 The peace plan clearly favors Israel while including enough provisions to have a veneer of legitimacy to those who are uninformed on the specifics of Israeli-Palestinian negotiations. Significantly, Israel would receive the entire Jordan Valley, which is currently part of the western end of the West Bank, according to the map. A future Palestinian state would thus border only Israel and not Jordan, and would not have access to the Jordan River at all. Fifteen Israeli settlements located in the West Bank would also be preserved as part of Israel. Jerusalem would remain entirely under Israeli control, and massive swathes of Palestinian land near the border would also be given to Israel.

The plan is nothing more than a roadmap for the permanent occupation of Palestine by Israel. In total, 30 percent of the West Bank would become legally part of Israel. Thousands more Palestinians would be forced to live under Israeli rule and oppression than currently do, aided in large part because the United States fails to acknowledge the international consensus that the current existence of Israeli settlements is already illegal. Israeli occupation is a wholly indefensible moral atrocity, as I have argued in the past, and Trump’s peace plan will validate and expand Israel’s occupation rationale.

Those living in the emaciated remains of a Palestinian state would not be free. The Palestinians are only granted their quasi-sovereignty under the new peace plan if they meet specific conditions. Among these conditions are the eradication of Hamas, and the recognition of Israel as a Jewish state. Even from a non-Palestinian perspective, these requests are absurd. Hamas exists largely due to the humanitarian crisis that Israel created by blockading Gaza. Reducing the influence of the terrorist group when Gaza faces rampant unemployment and horrifying standards of living is impractical, it is an unfairly contrived burden to place on Palestine. There is little that the Palestinian Authority can do to alleviate Gazean anger until Israel changes course.

Demanding that Palestinians recognize Israel as a Jewish state is essentially demanding that they disregard the Arabs and other non-Jews living in Israel. The political rights of Palestinians should not be contingent upon their acceptance of Israel’s status as a faux democracy defined solely by Judaism. Despite its claim to democracy, Israel wields an apartheid-esque system of oppression against Palestine, all for the sake of “protecting Jews” against antisemitism. But there is nothing antisemitic about standing for the full rights of every person in Israel regardless of their religion.

There are several additional alarming aspects of the plan. Trump promises a $50 billion aid package to help rebuild the Palestinian state and economy. The aid package includes ambitious goals for reducing poverty and unemployment in Gaza and the West Bank. It is deeply difficult to view that goal as either genuine or at all feasible. The Trump administration has already ended support to UNRWA, a United Nations Agency which provides humanitarian relief to Palestinian refugees. Promises of aid are near useless when Trump enshrines Israel’s mass theft of Palestinian land in the West Bank and does not demand any end to Israeli theft of Palestinian water infrastructure. The aid package is like putting a bandage on a bullet wound when the victim is still being shot.

Another supposed perk of the plan for Palestinians is the addition of two remote blocks of land along the Egyptian border contiguous with Gaza. These new additions to a future Palestinian state are described as future hubs of commercial, agricultural, and residential development. But the land is in the Negev desert, a long stretch of arid territory with little promise for development. Thin strips of Israeli land also separate the additions to Palestine from the Egyptian border, meaning that Trump has preserved Israel’s ability to easily blockade and contain the Palestinians. The tragic irony of the land swap idea is that the Negev was once inhabited by nomadic Bedouin communities, who the Israelis have systematically forced out, just as they hope to do with the Palestinians.

Trump’s “peace plan” for Israel-Palestine is nothing more than a plan for annexation, permanent occupation, and the continued fracture and theft of Palestinian lands. Under Trump and Netanyahu’s vision of the region, archipelagos of unfree Palestinian communities will be surrounded by Israeli settlements and access roads. Any serious reading of the plan in the context of historical theft of Palestinian land makes clear that such a skeleton of a Palestinian quasi-state will last a short time before more settlements and military actions extinguish any flickering of Palestinian sovereignty. Instead, the reality of segregation already suffered by Israeli Arabs, Bedouins, and Palestinians will become a reality for every single Palestinian in all of Israel-Palestine.

The image featured with this article exists in the public domain and is not subject to copyright law. The original was taken by the White House and can be found here.

To Expand or Not to Expand: A Government Restructure of the Supreme Court

“Until I Am Released or Dead”: Ahmadreza Djalali and the Detention of Dual Nationals in Iran

On Earth, As It is in the Vatican: Vatican City’s Financial Crisis Looms