Last week, The Gate sat down with Wendy Zeldin, the manager of the 61st Street Farmers Market, to discuss the work the market does, the impact it has had on the surrounding community, and food security issues in Woodlawn and the South Side of Chicago.

Founded in 2008 by Experimental Station, a nonprofit incubator of cultural projects and small-scale enterprises to build independent cultural infrastructure on the South Side of Chicago, the 61st Street Farmers Market aims to serve the residents of Woodlawn and its surrounding neighborhoods by providing affordable, fresh, and healthy food. The Market takes place outdoors from 9:00 a.m. to 2:00 p.m. every Saturday from mid-May through October. It moves indoors from November through April and takes place once a month after December. 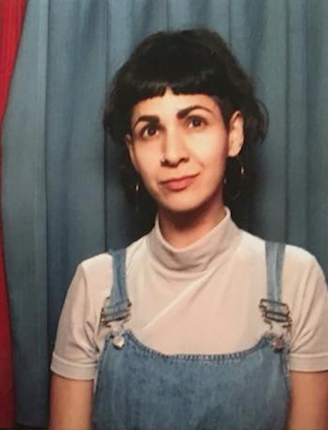 The Gate: How did you initially get involved with the Experimental Station and specifically the 61st Street Farmers Market?

Wendy Zeldin: I was doing similar work—food and garden education—and working with a lot of growers and thinking a lot about food systems. I'd heard about this position opening up a couple years prior, but at the time I was working for the botanic gardens, and I really liked my job. Then the job popped up a couple years later, so I applied. It was definitely a step forward for me in that I hadn't ever run a farmers' market; I had worked farmers' markets as a vendor before but I'd never been on the other side of it. But it felt like a very natural continuation of all of the work I'd been doing.

Gate: Can you talk about the food education programs as a part of the 61st Street Farmers Market?

WZ: As far as at-market education, we do three main things:

One of them is our chef demos that we do each week. You don't have to be a professional culinary-school-educated chef to hang out at the demo table; you can just be a neighbor who likes to cook a lot and is enthusiastic about a recipe. Each week we have somebody come and do a demonstration of how a dish is made, and we print out recipes to hand out. The criteria is that it is seasonal and most of the ingredients can be purchased from the market. Say this week it's squash season, so you make butternut squash soup and you say, "This is how I prepared it." You give out your samples, and you can say, "See that tent right here? This is who I got my squash from."

Then we have a tent called the Market School. It's our educational booth where we have organizations or individuals who have some food- or garden-related topics that they would like to discuss. We've done one with worm composting and one about the impacts that your food choices have on climate change.

The third program is called Sprout Station. We've done [it] for the last two summers, and it's something that I initiated because I know what it's like to bring kids to the market. Younger kids can come up to a tent and engage in an age-appropriate, educational, physical activity. For example, we have a bike with a blender on the back of it and it is powered by your feet. We let kids pedal on it and make their smoothies. When kids participate in Sprout Station, we give them two dollars of market money that they can spend on fresh fruits and vegetables at the market.

Gate: Can you talk about the decision to accept Link and the Double Value Coupon Program and how it has affected the farmers' market and the surrounding community?

WZ: Link-Up Illinois started the Farmers' Market Link Acceptance program. They are a program of Experimental Station, so I work with them very closely. That program is absolutely critical because it's one of the top complaints that anybody has about a farmers' market—that it's more expensive.

That program allows folks with Link cards to be able to double the amount of produce that they would typically be able to purchase. We started it eight or nine years ago, but every year it has been building, and more folks are using it. I had a meeting two days ago with the Greater Chicago Food Depository in trying to partner with them to figure out how to reach more Woodlawn residents. They want to discuss what they can do to make more of our customers know how to sign up for a Link card because it can be really challenging to navigate. You need to bring in pay stubs and talk about where you are compared to the poverty line. I think the application to receive the Link card is around eighteen pages long.

Gate: Just to clarify, the Double Value Coupon Program means that however much someone spends on their card, they get double that amount of credit for the farmers' market?

Link-Up Illinois is a state-wide program and they're doing this for markets across the state, and different markets have different match caps. In Illinois, twenty-five dollars is legally the highest it can be. So we have a lot of people come to us and say "I live in this other neighborhood but my market only matches up to fifteen dollars, so I come to you because it's worth getting on the bus for twenty minutes to get an extra thirty dollars of produce." Hearing that from people has been a very direct way to see that this has an impact.

Gate: How do you choose and recruit the vendors that come, and what kind of people are you specifically looking for?

WZ: That's all on me. This is my third fall season here, and when I started, there was already a great selection. I was very grateful to come into that.

It is an interesting thing attempting to curate this very well-balanced market. You go to some markets, and it feels like it's a food truck social. There's just all of this prepared food—burgers and tacos and ice cream and sandwiches. You have to wade through all of these restaurants just to get a couple groceries. That is definitely something we are disinterested in.

Through the years we've tried to ask neighbors what they need, and produce is the main thing that people are coming for, so we've always tried to have a large, plentiful selection of that. With other, more specialized food, I'm trying to not create competition among the vendors. So when people apply, my most common rejection email is saying "thank you for your interest, but we already have a tea vendor. If that ever shifts, I'll let you know but I don't want to step on her toes with your very similar products."

Gate: Do the vendors all come from nearby?

WZ: It's a requirement. We had a specific number, I want to say its 150 miles, but it's usually something we don't have to think about because it's all Chicago-based. A lot of our produce is within ten or twenty miles from here; some are in Chicago proper, like urban farms.The furthest anything comes are apples and berries from Southwest Michigan.

Gate: What do you think is the most important thing, aside from this kind of work, that needs to happen to address food security issues on the South Side and specifically Woodlawn?

WZ: The longer I'm here, the clearer it becomes every day that it is just such a deep, systemic, depressing matter of racism and classism. The way that the line is drawn between Hyde Park and Woodlawn is this very clear demonstration of "you will get everything you ever wanted and needed north of the Midway" and "south of the Midway, good luck getting anything but a bag of chips." The resources are just not there.

It becomes this glaringly obvious lack of attention and funding going into South Side food systems. Thankfully there are so many people taking initiative and starting urban farms and reaching out to different communities and different CPS schools, trying to get people hooked up to Link to be able to afford this stuff.

Our market has been here for twelve years, which is really awesome. For me, so much of it is just outreach. It keeps me up at night to be like, "I know that these people who want access to this food are nearby and just don't know about this program."

Gate: How have you conducted outreach in the past?

WZ: So many ways. I just wish that my job was going door-to-door every day saying "Hi, can I talk to you about Link cards?"

I try to not have it be all Internet-based because that's a huge assumption to make. We do bus ads, which are really crucial. For the market specifically, we do those big banners that we have in a few different locations throughout the city. We make flyers that we put out at libraries, restaurants, and cafes. We put ads in the South Side Weekly. We make magnets that we distribute that have all the market dates.

We do have a CBS commercial about Link match. That gets so many views. That's not for our market specifically, but for the Link match program.

Gate: What do you see in the future of the 61st Street Farmers Market and how do you hope that it grows?

When the Obamas were first talking about everything, Michelle released something that said, "I'm going to make a farmers' market in the area!" and we were like *cough cough.* And our people have talked with their people, and they were like, "Sorry just kidding, we didn't know about you." We have since then been trying to work together, and I'm thrilled that Michelle is so excited about farmers' markets. I can't wait for her support of ours.

When I think of how many people would be visiting that museum and library and then walking around the area, that is potentially going to be bringing in a very different type of customer, so it makes me wonder about how our needs would have to shift. If you were coming in to do that touristy activity, you're not going to come to the farmers’ market and buy kale and potatoes and squash. You're going to buy an ice cream cone.

That is the same for the dorms that are being developed right now by the University. They're right over there, and they're enormous, and I am excited that more students will be on the other side of the Midway. I feel like there's such a weird stigma, and so everybody just stays on the north end of the Midway. It's just very funny to me that some people just don't understand that it's totally cute, cool, and accessible.

So I'm excited that there will be more students on the other side of the Midway so nearby, but at the same time I'm like, "What will they want?" I don't know that eighteen-year-olds will have access to large kitchens to cook in or have much experience cooking. It's made me considerably weigh out how that curation would shift. At some point, it's like, our mission is to feed the Woodlawn community in significant ways, not just like, "Here's a little snack." We just need to continuously be assessing who we are serving, and keeping Woodlawn as the first priority is the most important.

All photographs courtesy of Wendy Zeldin.