Former President Barack Obama returned to his hometown Chicago two days before Election Day to campaign for Democrats up and down the ticket. Organized by Democratic candidate for Governor J.B. Pritzker's campaign, Obama's visit, which coincided with the ten year anniversary of his election to the Oval Office, drew more than 5,000 loyal Democratic voters to the UIC Pavilion for a Get Out the Vote rally.

At the event, the former president emphasized the difference between the Democratic candidates and the GOP, referring back to the message of hope that fueled his election a decade ago.

"When you vote, Illinois, you can choose hope over fear," Obama told the audience, the majority of whom had waited for hours in the rain to get into the event. "Hope is still out there, we just have to stand up and speak for it." 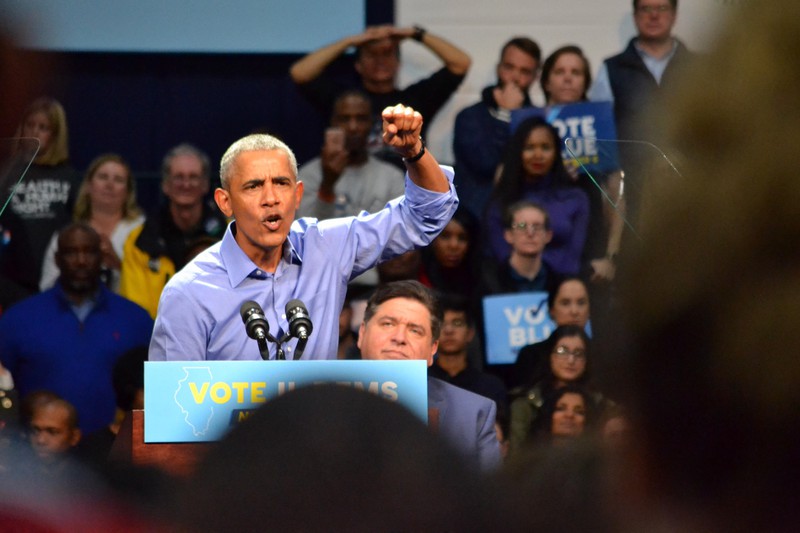 Obama, a former UChicago law professor who represented Illinois in the U.S. Senate prior to his ascent to the White House, said that this midterm may be “the most important election of his life” -- possibly more than his own election in 2008.

"You are right that one election doesn't change everything," he said, "but what an election can do is make things better. Your vote might mean that somebody has health care who wouldn't have had it. You can save a life with your vote."

Obama defended his legacy in office and urged voters not to be misled by Republicans' campaigns. "For the life of me, I will not understand why [Republicans] made it their number one cause, to take health care from people," he said. When a member of the audience shouted "because you did it," in response, Obama joked, "Oh! Because I did it?"

Senator Tammy Duckworth, the junior Senator from Illinois who also spoke at the rally, called Republicans’ claim that they protect the coverage of people with pre-existing conditions "baloney," and said that they cannot be trusted.

Although Obama did not mention Donald Trump by name, he contrasted their views. "I believe in fact-based campaigning. I believe in reality-based governance," he said, accusing Trump of "badly, shamelessly lying."

The former president encouraged voters to support Democratic gubernatorial candidate J.B. Pritzker, the penultimate speaker at the rally who introduced Obama. "We should want to be kinder and more generous. We aren't going to be perfect, but we can be better than this," Obama said, "J.B. believes in that better America." 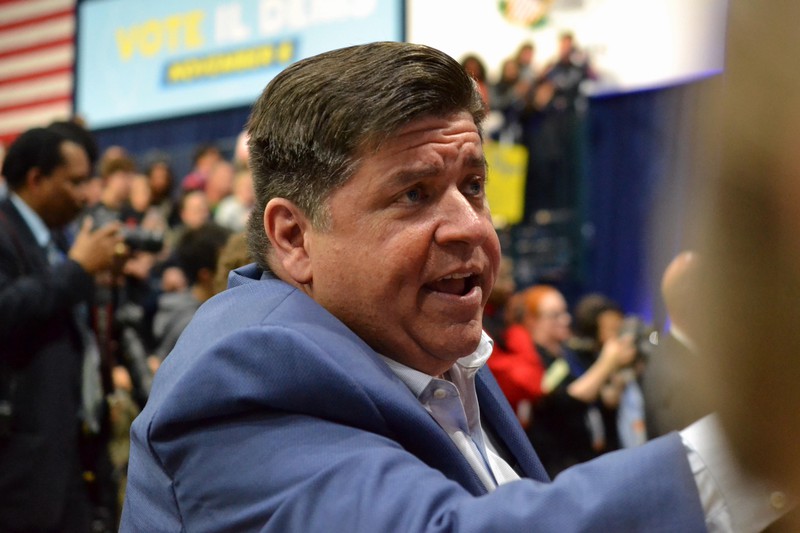 Pritzker, who is leading incumbent Republican Governor Bruce Rauner by at least ten points in recent polls, also juxtaposed himself to the GOP, pointing to campaign promises like building a more inclusive economy and welcoming immigrants.

"This election is about what Illinois can be, it's about what we can build," he said, urging voters to "fight for a vision" of a better state. Juliana Stratton, candidate for Lieutenant Governor, also shared her vision of democratic values. "We care about people," she said, "we care about each other." She called out Governor Rauner with an African proverb: “If you want to go fast, go alone, if you want to go far, go together. Politicians like Bruce Rauner go nowhere fast all alone, we will go far together.” 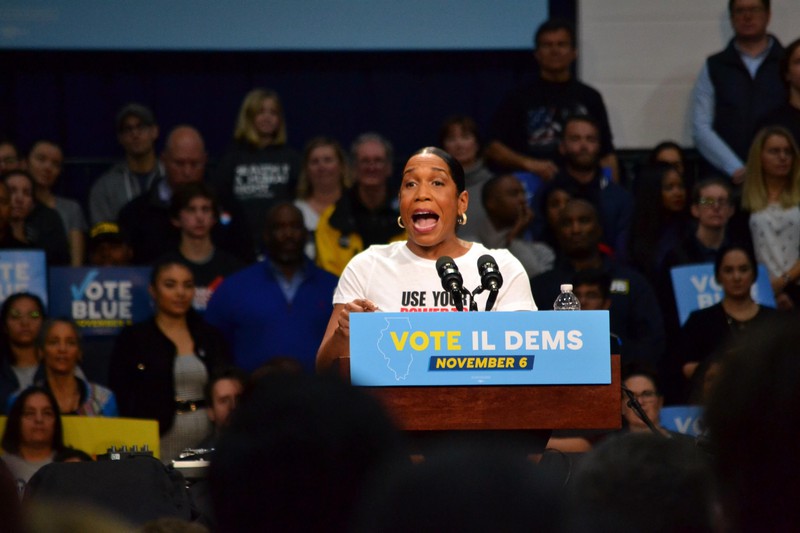 Kwame Raoul, the Democratic candidate for Attorney General, replaced Obama in the state Senate after Obama was elected to the U.S. Senate in 2004. Raoul spoke about his family's Haitian roots. "I'm a proud American, and neither Donald Trump or his bigoted rhetoric or executive order proposals can change that,” he said as the audience roared in approval.

Senator Dick Durbin and Sen. Duckworth, neither of whom are up for reelection this year, also took aim at Republicans. Durbin spoke about the election changing the future course of the country after two years of President Trump: after "two years of complaining” Democrats have “two days of campaigning." 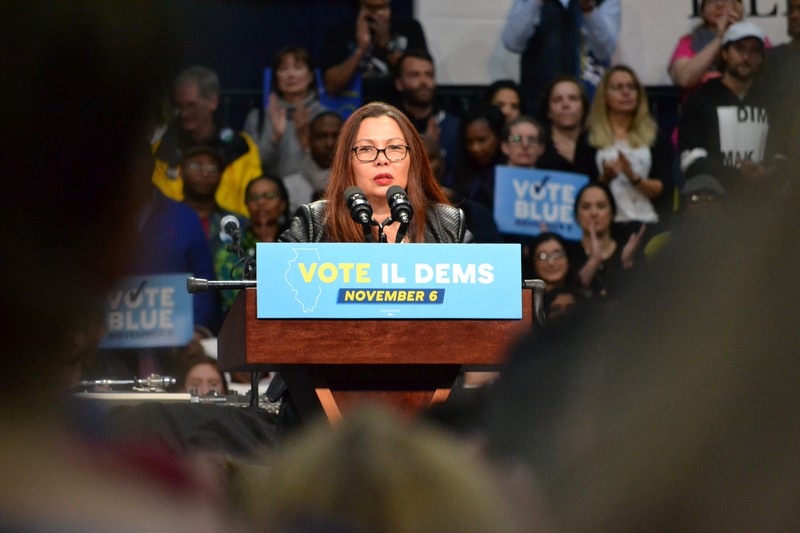 Duckworth accused Gov. Rauner of caring more about public relations than the people of Illinois, and beseeched the crowd to send new people she could work with to Congress, like Sean Casten and Lauren Underwood, two Democrats challenging incumbent Republican Representatives in IL-6 and IL-14, respectively.

Casten, a former clean energy entrepreneur, used his time on stage to speak about climate change and challenged his opponent, Rep. Peter Roskam, for not holding a public town hall for 10 years. Underwood spoke about her career as a nurse, her work in Washington to implement the Affordable Care Act during the Obama Administration, and the enthusiasm she's seen in IL-14, with volunteers waiting in line to canvass. 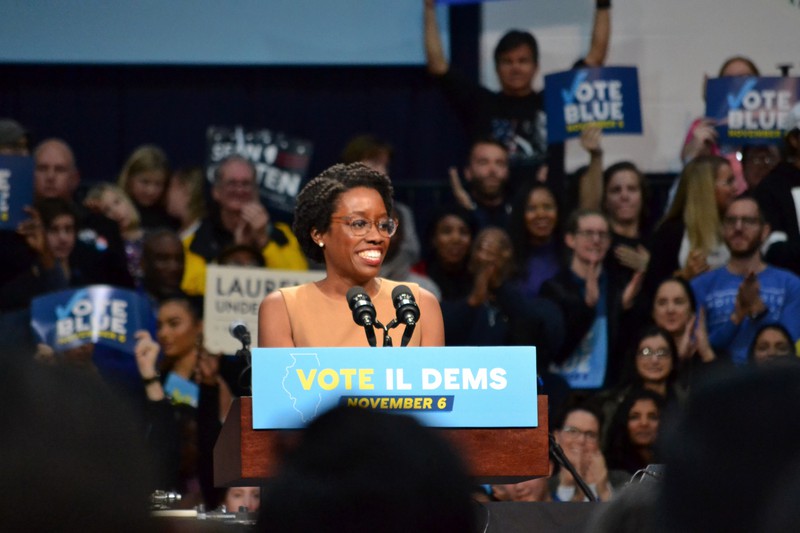 Underwood told the Gate she was honored to have Obama’s support. "He's been such an inspirational leader to our country, but certainly to me personally," she said, "I'm grateful that he would take some time to come and make sure everyone goes out and votes." The candidate told the Gate that she is "pumped" and optimistic for election day. 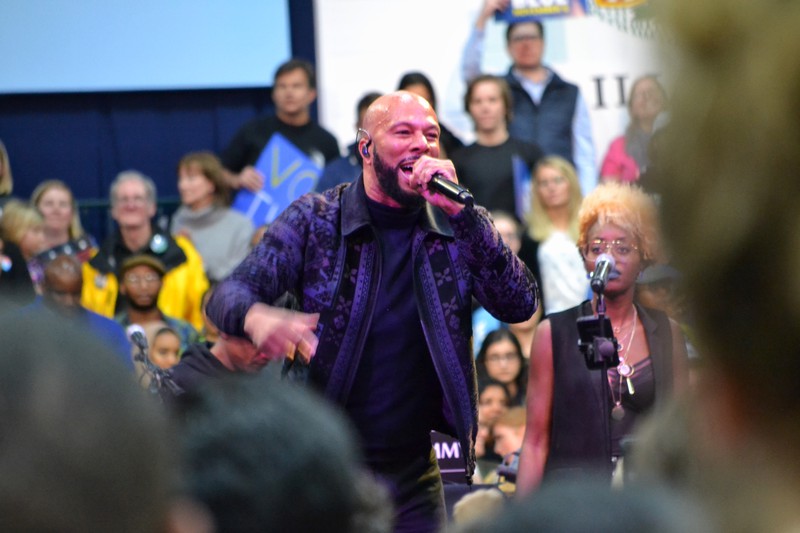 Illinois Treasurer Mike Frerichs, Secretary of State Jesse White, and Comptroller Susana Mendoza also spoke at the rally. All three called Democrats to action. The rapper Common, a Chicago native, also took to the stage for a high-energy performance, during which he freestyled about early voting.

Many students came from across the state to see the lineup. Sarah Aguilar, a student at Illinois State University, woke up in the early hours of the morning to drive to Chicago. For Aguilar, the diversity of the Democratic slate was important. She found Juliana Stratton, the candidate for Lieutenant Governor, to be particularly inspiring. "By having her representing our underrepresented population, it gives me hope that I can represent and do a good job at my university, and continue to make change." Lisette Zarco, a friend of Aguilar and recent Illinois State graduate, agreed. Zarco said "I love it, and that's why I'm going out to vote," in reference to Stratton's "fight for women and minorities." 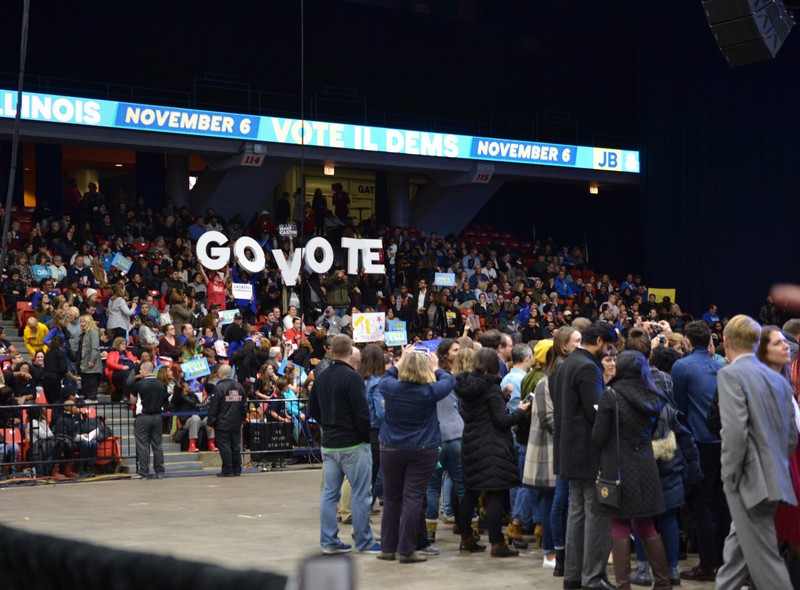 Sami Solebo, another student at Illinois State, felt called to action by the rally. "We need to do more as millennials specifically," Solebo said, "because we have the power to change the House, the Senate, and the government in general. We need to act as younger people, because this is what is going to happen to our future." Zarco quoted Obama's speech, in which he twice reminded the crowd "don't boo, vote," a phrase he first uttered at the Democratic National Convention in 2016 when he mentioned actions the Republicans had taken that the crowd did not like.

"I want everybody voting," said Obama as he closed the rally, "If you don't agree with me, still vote." On Election Day, Illinois Democrats will learn how successful their message was, and, in the words of Obama, if they delivered a “consequence for an absence of truth” to the Republican party.

The images featured in this article are courtesy of Dylan Wells.

Sarah Wasik is a fourth-year double majoring in Public Policy and Philosophy. She has spent her summers working campaigns and interning at both the state and federal levels of government. When she isn’t writing, reading, or learning more about policy and politics, she is probably running up and down the lakefront path or spending time with friends.

Dylan Wells is a fourth-year Political Science major and Near Eastern Languages and Civilizations minor. This summer Dylan worked at CBS News in the Political Unit. Previously, she interned at ABC News' Washington, DC bureau as a Political Unit Fellow, twice at the Institute of Politics as the Events Intern and the Summer Programs Intern, and with POLITICO Live at the DNC. Last year she served as The Gate's Editor-in-Chief, and before that she served as the Elections Editor. Dylan was the recipient of the inaugural David Axelrod Reporting Grant, which she used for a story on domestic human trafficking. Dylan enjoys traveling, exploring the Chicago brunch scene, and playing with her dog, Wasabi.