It starts out as a trickle. A pink pussy hat here, an edge of posterboard there among the demure black coats and lowered heads of the bus riders. Then, on the train, it’s more of a stream, clusters of girls and women sitting with their knees touching, talking excitedly or showing off their signs. From the train it’s into the flood, swept up in a sea of humanity, people ready to take to the streets like they did a year ago.

On November 9, 2016, many Americans, especially women, were left reeling. Those who went into the 2016 election season expecting to come out as citizens under the country’s first female president were instead left with a commander-in-chief who bragged about his perceived right to grab women “by the pussy,” bought the silence of an adult film star he’d had an affair with, constantly made insidious references to his attraction to his own daughter, and has been accused of sexual assault by nineteen women. And counting.

By the time Donald Trump’s inauguration day came around, women across the country were in desperate need of healing. The women’s march on January 21, 2017 was a moment of solidarity and healing, and the message that many heard was “we’ll get through this.”

“I think last year it was kind of a reaction to what had just happened with the election, with this notion of ‘resistance.’ And resistance means that you’re standing firm against something. And I think this year, it’s about taking power, it’s about being emboldened, to not sit back and not simply try to survive, but to thrive,” said Kim Foxx, the Cook County state’s attorney. 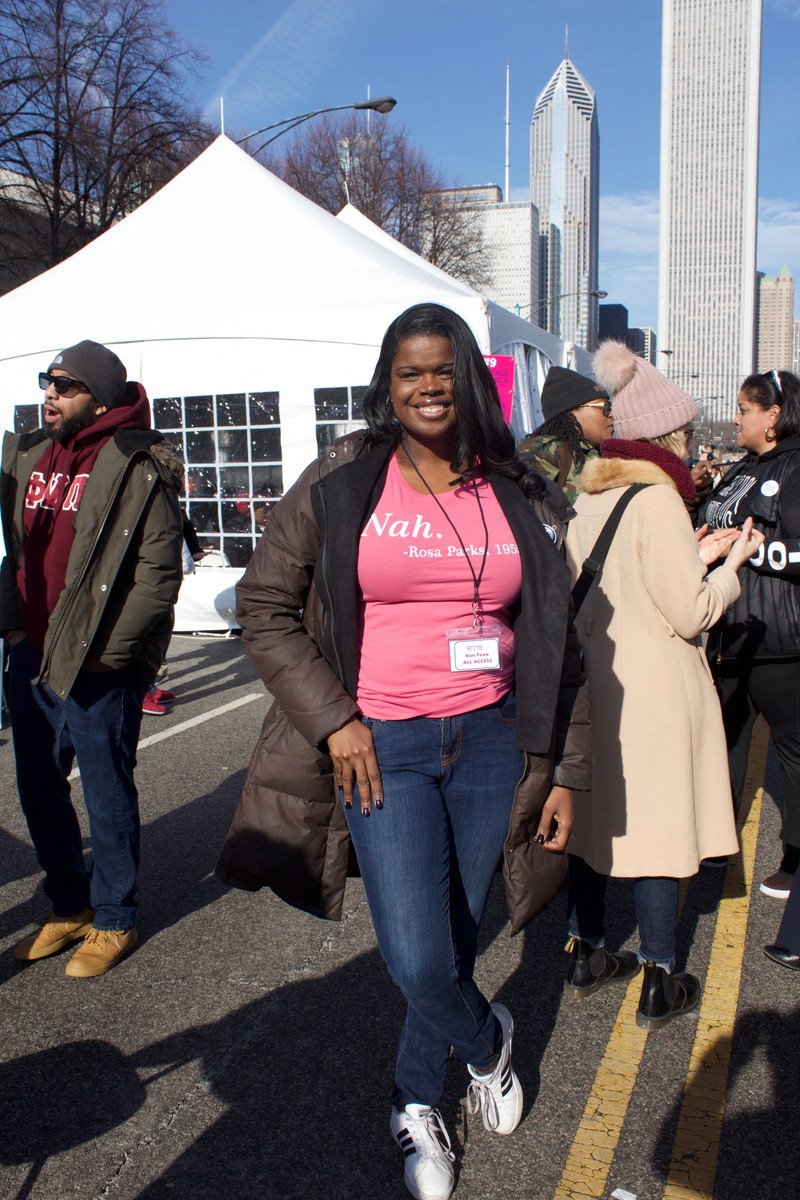 And indeed, this year felt different. This was due in part to the fact that, while the Trump administration has undertaken several consequential actions that are deeply worrying to liberal Democrats, it has failed on many of its campaign promises, including ending the Affordable Care Act and enacting the travel ban (which is still partly blocked until it is considered by the Supreme Court in April). All of this suggests that, at least on some level, the resistance is working.

The Chicago Women’s March this year was different in another way. The 2017 march quickly came under fire for a lack of intersectionality, and indeed, it did attract a great many white women who were new to activism, driven by a sense of fear and urgency that women of color have contended with for decades. More importantly, many white women are part of the reason Trump is in office and posing a perennial threat to women of color—Trump won 53 percent of white women’s votes.

“I think there were a lot of lessons to be learned about what [intersectionality] looks like,” said Foxx. “I think that you’d find that a lot of women were feeling like they weren’t welcome. And there has to be some real intentional efforts to welcome folks, and to amplify issues that matter. When you talk about being a black woman, for me, I embody race and gender, and there are other people who embody other things, whether it’s sexuality, whether it’s ability. And we have to recognize that those voices are of equal import. And anything that we do that does not have intentional inclusion is not going to be as productive as it could be.”

That effort was visible in the 2018 Chicago Women’s March. Most of the speaker lineup was composed of women of color, people with disabilities, and non-cisgender/heterosexual people, each taking the mic to explain why they were marching. Celina Villanueva of New Americans Democracy Project and youth engagement manager of the Illinois Coalition for Immigrant and Refugee Rights took to the podium to give one of the most impassioned speeches of the morning, decrying the fact that a generation of people are at risk of losing their homes as a result of the repeal of DACA.

“I challenge us all to seek true intersectionality in this movement and in every movement. For the white women in the crowd—and there’s a bunch of y’all—I challenge you to organize your own communities and to have the uncomfortable conversations with other white women and other family members who voted for Trump last year,” said Villanueva. 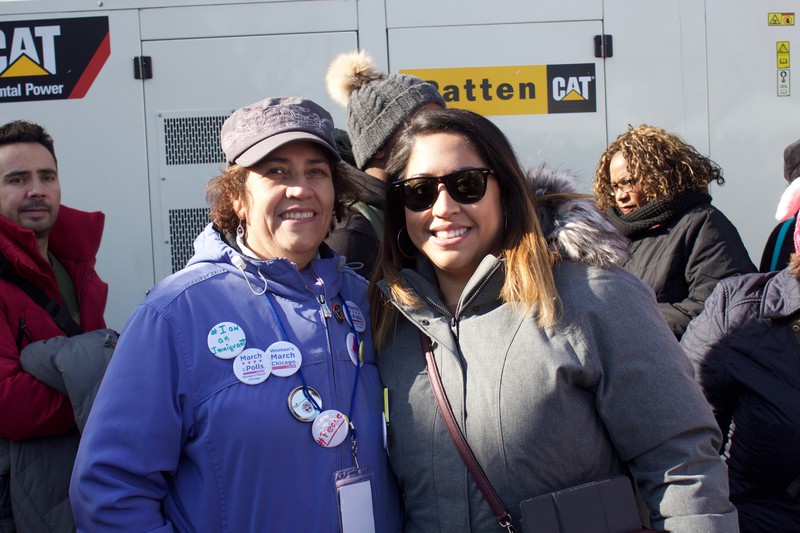 Celina Villanueva and her mother backstage after her speech.

Support from diverse groups can sometimes muddle a movement’s goals. When last year’s March organizers revoked their partnership with an anti-Trump advocacy group that also supported the pro-life platform, many questioned the feasibility of simultaneously including communities of differing background experiences and maintaining unity within the movement. Perhaps as a consequence, many of this year’s speakers and organizers carefully examined the intention behind their communities’ participation in the march to align with its broader goals. Tahera Ahmad, Director of interfaith engagement at Northwestern University, spoke to the Gate specifically about the role the Muslim Ummah.

“Many Muslims recognize oneness [in their practice], and I think that’s what we have to provide to this movement. No matter where you come from, what background you come from, it’s part of the core of our belief system that everyone deserves dignity. That’s what I see my role: to remind people that we are one, we come from one, and return to one. Everyone has a place in this movement, and I think many Muslims come from this place,” said Ahmad. 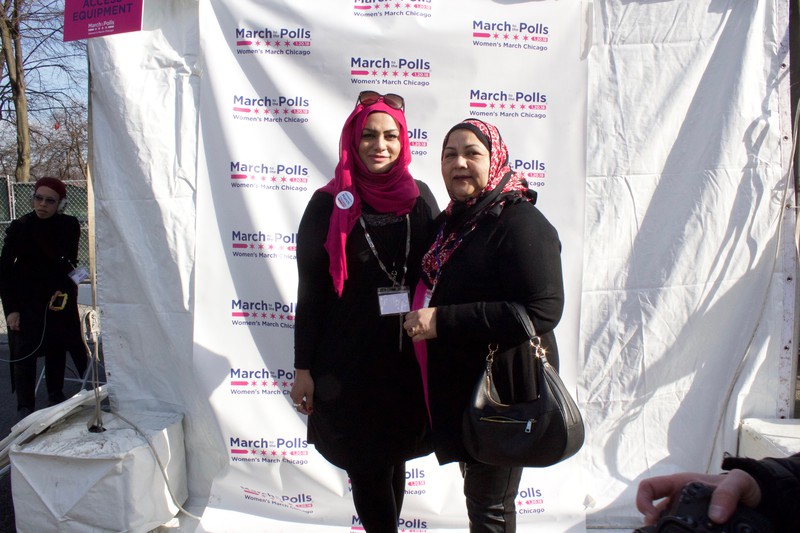 Fahed Ahmad and her mother, who she says was anxious to attend the march.

The march’s broad inclusivity also spanned age groups—three women toting signs that read “First-Gen Immigrant,” “Second-Gen,” and “Third-Gen” posed for a picture outside of the Federal Plaza, where the march’s route concluded, and a barrage of police barriers and garbage trucks broke up the crowd. Parents pushed strollers and wagons adorned with crayoned signage alongside groups of older women carrying boards that read “I can’t believe we’re still doing this.” Some were at once frustrated by the lack of progress in the crusade for gender parity and inspired by the youth turnout.

“I think a lot of [the older generation] are upset we didn’t get out and do all of this before the 2016 general election. We really dropped the ball between 1976 and 2016 in terms of not being involved in politics. The younger generation is a lot more organized,” one marcher, who attended her first organized political event in 1974, told the Gate. 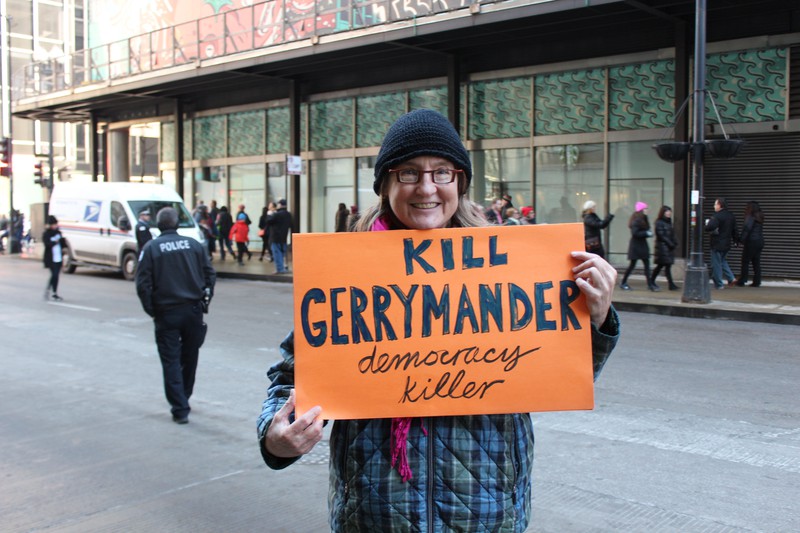 A protester, who attended her first protest in Madison, WI in 1974, displays her sign.

Also new this year was the protest’s official title: March to the Polls. The organization’s first objective, as listed on its website, was “to celebrate the spirit of the resistance efforts over the past year and unite to focus on the 2018 elections and beyond.” The site’s home page also links directly to a Resources for Voting page, which includes information about voting registration and other tips from the League of Women Voters in Illinois, all part of the effort to focus marchers’ good intentions into concrete change. 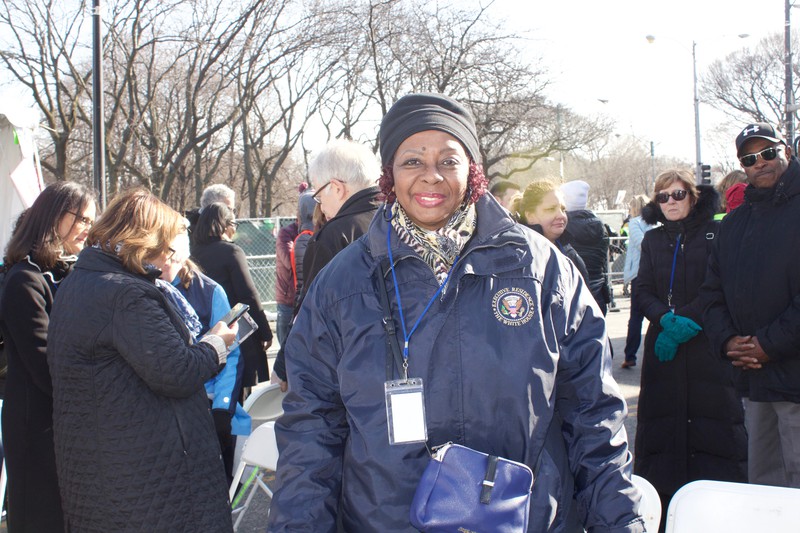 Illinois State Senator Mattie Hunter was eager to show her support for the marchers.

If the 2017 Women’s March was a moment of reaction and resistance to what many considered an unthinkable outcome of the 2016 election, this year’s organizers and marchers assembled in downtown Chicago with a renewed sense of purpose and a strategy at the ready. As Illinois State Senator Mattie Hunter told the Gate, “when women speak, things happen. And when women roll up their sleeves and start working, things happen. So what we’re here to do is calling for more women to get involved in every facet of life.”

All photos featured in this piece are courtesy of the authors.

Alia Shahzad is a second-year majoring in a currently undetermined social science. She's Co-Chair of the IOP's Women in Public Service Program and an assistant projectionist at Doc Films. Over the summer, she interned at public policy media start-up Apolitical researching gender-based public procurement. She enjoys hiking, writing creatively, and brunching in Chicago's Chinatown.