Katrina Mulligan is currently the Director for Preparedness and Response within the National Security Division in the Department of Justice, where she works to improve government readiness for different types of emergencies, from natural disasters to man-made calamities. But she did not start out there.

Mulligan speaks quickly, moving her hands to explain how, since her graduation from the University of Chicago in 2001, she became a paralegal for a lawyer who had just lost his first congressional primary. Her eyes light up while recounting the moment when he asked her to join his senatorial campaign. She had to call her mom first and ask if she thought it was a good idea, but a week later, as Obama’s first senate campaign hire, Katrina was purchasing the domain name BarackObama.com.

After Barack Obama’s Senate win, Mulligan did not join his senate office. Instead, she went on to get a law degree. She spent her third year in law school working for the American Bar Association in Jordan. While in Amman, she started to hear rumblings that Obama was planning to run for president. After shooting Obama an email to confirm the rumor, Katrina headed back to the States for more campaign work.

Mulligan became heavily involved in Obama’s presidential campaign, traveling all over the country and building the infrastructure necessary to win. She remembers how stressful the process was: she had to study for the bar exam in Jordan to ensure that her work on the campaign trail was not going to stop her from taking the test during her only opportunity between Super Tuesday and the Democratic National Convention. The culmination of these two major events is how she measures stress levels in her life. 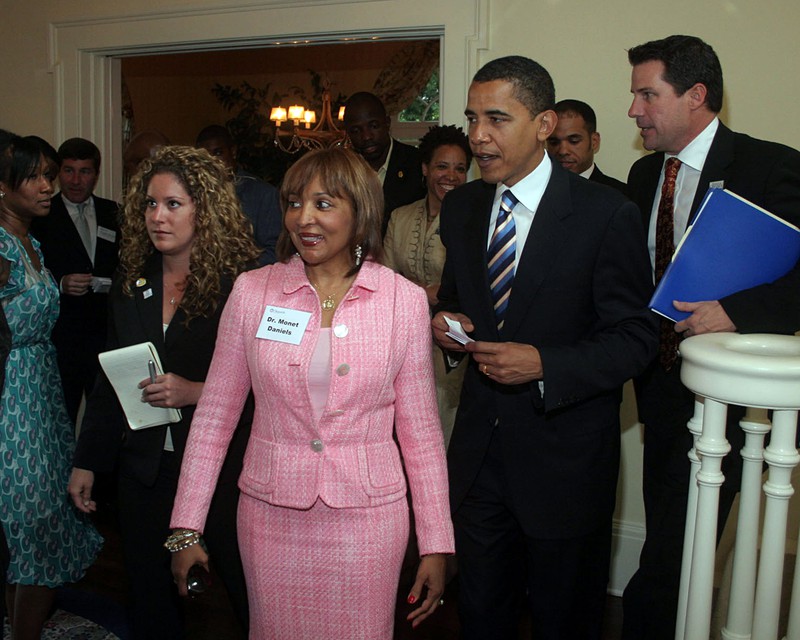 Katrina in the midst of the action, leading Obama through a Presidential campaign fundraiser in 2008.

When asked about her favorite Obama memories, Mulligan, somewhat sheepishly recounted how Obama hinted that she might be trying to sell his booger-infested Kleenex on E-Bay. While they two were waiting in the stairwell before a fundraising event, Katrina instinctively reached out to grab a used Kleenex from Obama to which he replied, “That’s embarrassing. What are you going to do with that, sell it on E-Bay?” Katrina appreciated the humanity of the moment—it demonstrated how Obama stayed down to earth throughout his campaign and presidency.

Katrina says luck set her on the career path of a lifetime. From grassroots organizing on the Obama senatorial campaign, working advance for Obama's presidential campaign, practicing law at for a private law firm, working for the National Security Council, National Counterterrorism Center, and National Intelligence Management Council, her range of experiences make her a self-described “unicorn” in Washington D.C.—a policy expert who has the fundraising and organizational experience required to push policy ideas into actual policy.

Her unique qualifications have led her to design policy to release Guantanamo detainees safely without significant risk of re-engagement, serve as the assistant to the director of the National Counterterrorism Center, Matt Olsen, during Benghazi and the Boston Bombings, and direct the response to unauthorized disclosures of intelligence information following the Snowden leaks. Through her work, Mulligan trained herself as an expert on the most pressing policy issues, resulting in meetings with Obama’s National Security Advisor Susan Rice -- sometimes three times a week -- and sitting in on National Security Council meetings chaired by the President. However, before all this excitement she was in Hyde Park still trying to complete the Core.

Katrina’s time at the University of Chicago led her to befriend people with a wide range of interests. Because her undergraduate friends took completely different career paths than hers, when they became successful she was “purely and totally happy for them because none of their success came at my expense.” Katrina advises current students to “invest in the relationships that you make at Chicago because they will they have the potential to be more important to you than any relationship you make after college.” Accordingly, the most important skill Katrina learned in college was diplomacy, which she says she picked up as a member of her sorority, Alpha Omicron Pi: “We are all very intentional about investing in our academic education, but it’s important to invest a little in your social education too.”

As far as career advice is concerned, Katrina says it’s okay to be unsure about what you want to do, but to “figure out what the attributes are of a really great day or a really interesting intellectual experience are for you, and those attributes are things that you can leverage to help you find jobs that you are really good fit for.” She notes that it is hard to compete for jobs when all the applicants are highly qualified, so she says not be afraid of being unique. Competing on a different field makes you impressive and useful. Looking back at the excitement and fulfillment her career has brought her thus far, Katrina says it was a result of going where the action was. She advises you to do the same.

The images in this article are courtesy of Katrina Mulligan.

Sarah Wasik is a fourth-year double majoring in Public Policy and Philosophy. She has spent her summers working campaigns and interning at both the state and federal levels of government. When she isn’t writing, reading, or learning more about policy and politics, she is probably running up and down the lakefront path or spending time with friends.

Megha Bhattacharya is a third-year Political Science and South Asian Languages and Culture double major. This past summer, she interned with R Street, covering policy work. Previously, Megha has worked as the Summer in Washington and Speaker Series Intern at the IOP. In her spare time, she enjoys playing the ukulele and making Snapchat filters.