In August 2020, Alexey Navalny, a leading Russian political activist and critic of President Vladimir Putin’s administration, was travelling across the country to meet with his allies. On a plane to Moscow he suddenly felt sick. “I wasn’t in pain. But it was worse than pain. There was a feeling of ‘The End’ written in capital letters before me” he later described in an interview. The plane made an emergency landing in the city of Omsk, and emergency medical personnel promptly put Navalny into induced coma. He was transported to Germany and treated there. A month later Navalny was discharged from the Charité Hospital in Berlin with a prolonged period of rehabilitation ahead of him. By then, the intergovernmental Organization for the Prohibition of Chemical Weapons (OPCW) had no doubts about what caused Navalny’s condition. Navalny was poisoned with a previously unknown substance from the “Novichok” family, a class of compounds recently banned by the OPCW’s Chemical Weapons Convention.

On December 14, 2020, a team of investigative journalists from Bellingcat and several major global news outlets, together with Navalny’s non-profit Anti-Corruption Foundation, released texts linking Navalny’s poisoning to a group of Russia’s Federal Security Service (FSB) employees. The telecom and travel data was clear: FSB chemists had been shadowing Navalny for years and followed him to every location during the critical events in August. Several hours before the publication, Navalny tried to reach alleged executioners of the poisoning by phone. One of them picked up. Pranked into thinking it was a call from a supervisor’s assistant, he confessed everything. For many Russians, this was a moment of shock and revelation that the almighty secret service “are not gods.” 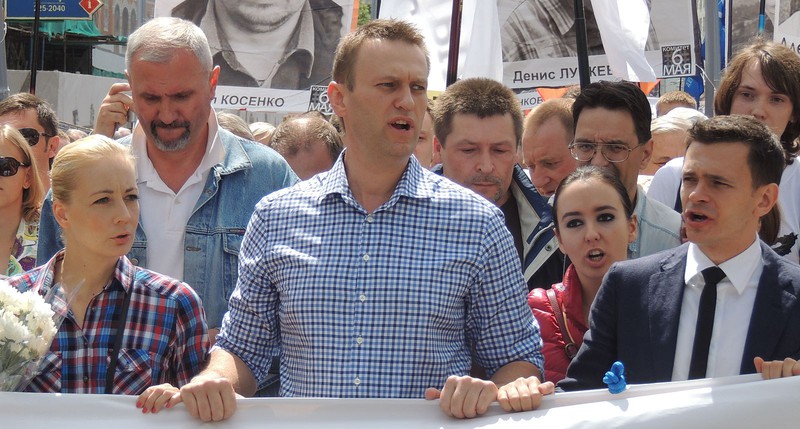 Navalny and his wife Yulia at a rally in Moscow / Source: Bogomolov.PL

After regaining consciousness, Navalny insisted it was his duty to return to Russia after finishing rehabilitation. He planned on continuing his political activism as the founder and leader of the Anti-Corruption Foundation, a non-profit organization exposing the schemes which Russia’s ruling class use to steal and launder public money. But when Navalny landed in Moscow on January 17, he was immediately arrested.

Police justified his arrest with a court case from 2014 in which Navalny was found guilty of embezzlement and put on parole. Although the parole sentence was pronounced “fundamentally unfair” by the European Court of Human Rights, Russian courts never overturned it. This time, Navalny was accused of evading parole officers by leaving the country for Germany. On February 2, he was sentenced to two years and eight months in prison. In addition, Navalny is currently undergoing another trial, in which the prosecution demands a fine of nearly $13,000. He has been sued for defamation of a Great Patriotic War veteran who participated in a pro-Putin political ad; Navalny called the actors in the ad “traitors.”

A Youtube video summarizing the Anti-Corruption Foundation’s latest findings went public as Navalny awaited the first trial. It exposed Putin’s massive secret residence on the Black Sea. The luxury, on which taxpayers’ money was spent, enraged many Russians and fueled the belief that Putin is guilty of corruption, a view now shared by 17 percent of the population.

In late January, tens of thousands of Navalny’s supporters across Russia took to the streets to protest his arrest and express contempt for Putin’s illegal use of public money. The police stopped, dispersed, and jailed peaceful demonstrators more brutally each time, and there is little hope that the protests will continue gaining momentum. While over 40 percent of the population believe there may be further protest actions, only 15 percent said they would participate in them. The previous decade already saw a number of demonstrations against oppressive political reforms and economic stagnation. They were often led by Navalny and triggered by the latest findings of the Anti-Corruption Foundation. Each time, many protesters would be beaten and jailed, and the parliament would subsequently pass laws further constraining opposition and free speech. Meanwhile, Putin’s regime would carry on. Will this time be any different?

There are reasons to believe that the current protests, however fruitless they may be today, will someday be viewed as a tipping point in Russian history. The ideological weapons that Putin’s regime uses to protect itself are slowly but surely falling apart.

Putin’s legitimacy has always depended on his ability to deliver economic stability. But with Russia’s oil-dependent economy weighed down by the government’s predatory tax and business laws, more people across class lines feel that a stability of misery is not worth preserving. As the population is getting poorer, state officials’ luxurious lifestyles exposed by Navalny grow less tolerable. The economic justification that Putin’s regime invented for itself and weaponized against dissident voices is dissolving.

Silence has long been another weapon of Russian authoritarianism. Dissident opinions, however vaguely critical of Putin’s status quo, are hardly ever allowed on state-owned media outlets. The opposition is confronted with total erasure: Navalny’s name was virtually never mentioned on TV until the poisoning, when foreign governments and international organizations demanded comments. As Navalny inevitably got more exposure, the tactic was changed to ridiculing him or portraying him as a cold war-style secret agent. Still, with Navalny’s name finally uttered, more people are finding out about his investigations. His approval and disapproval ratings have both doubled in recent months. Navalny’s mockery of the elites’ larger-than-life lifestyle has also spread through memes and viral songs.

As government corruption makes overt democratic competition impossible, the symbolic fight between Putin’s regime and its opposition is always in full force. By shifting blame for all crises onto local officials or subordinates, Putin remains associated with order and safety for many Russians, an apparent strong hand who manages brilliant secret service operations. Opposition groups are pigeonholed as either impressionable teenagers or foreign agents.

However, by poisoning Navalny, the authoritarian regime has allowed new powerful symbols to emerge. Now some see Navalny as a political martyr. On social media, people are expressing admiration for Navalny’s courage and persistence and his relationship with his family. The support from Navalny’s wife and children during the treatment, the little heart he drew on the glass separating him from his supporters in court, and his final assurance that “everything will be fine” to his wife after trial all served to add a profound new dimension to the image of the corruption critic.

Those who turned a blind eye to the government’s inefficiency may be less likely to ignore attempted murder. Putin’s paranoid “safety first” ideology appears invalid with the allegations that the FSB has attempted to kill at least one of its own citizens. Additionally, the Anti-Corruption Foundation’s attempts at ridiculing the elites’ lies and prodigality are bearing fruit. Viewed by a quarter of Russia’s adult population, its latest video criticized the lavish lifestyle of the untouchable Putin himself, so the president may be finally running short of untouchability. Seventeen percent of those who heard about the film or watched it said that it made their view of Putin more negative.

With Navalny being one of Russia’s seventy-six current political prisoners and with investigations into past deaths of activists wielding alarming results, we are witnessing a faltering regime that imprisons and kills its people for dissent. Although Putin’s approval ratings are still in the sixties, gradually more Russians are becoming politicized and spreading their oppositional views. The Kremlin is losing three of its important weapons: economic justification, silence in the media, and a facade of lawfulness and competence.

However, studies show that authoritarian political systems can slowly deteriorate for decades without major reforms or revolutions. In its final stage, cornered like never before, Putin’s regime will likely employ the weapons that still remain in its disposal. That is, the fists and batons of the police, the unwarranted arrests and raids, the fabricated court decisions, the torturing of protesters in police custody—up to and including banned chemical weapons. It may be that Navalny’s dream of democracy, “the Beautiful Russia of the Future”, will eventually prevail. But at what cost? 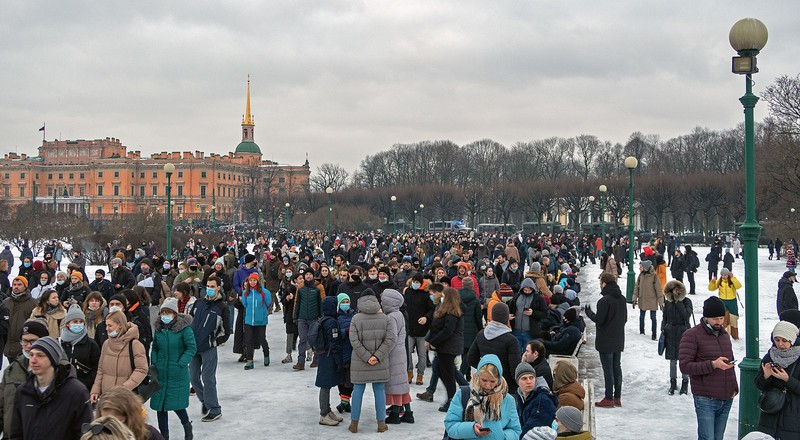