As the Democratic primaries wound down and it became obvious that the 2020 presidential race would feature two septuagenarian white men, former Vice President Joe Biden promised to pick a woman as his vice-presidential nominee. This marks the third time in American history a woman will run for the nation’s second-highest executive office, following the unsuccessful bids of Representative Geraldine Ferraro in 1984 and Governor Sarah Palin in 2008. Biden's particular choice has come under intense scrutiny from the media, with a number of Democrats — including some of his former primary opponents — vying for his attention both privately and in the press. In an election between such well-known candidates as Biden and President Trump, and the historical rarity of vice-presidential candidates swinging elections, some may doubt whether who Biden chooses matters at all.

However, Biden’s vice-presidential pick could be significant for a number of reasons. For one, almost half of the 13 women The New York Times considers to be on his shortlist come from a possible swing state that could help shape the results in November. For example, if Florida Representative Val Demmings could secure a Biden victory in her home state, and if Biden does not lose any states Hillary Clinton won in 2016, then the Democratic ticket would only need nine more electoral votes to win the White House, making him a practical shoo-in given his current leads in states like Arizona and Michigan.

For a vice president’s home state to matter in the election, two things must be true: the Electoral College must be won by a narrow margin, and it must be reasonable to think that the vice-presidential pick shifted their home state’s votes from one party to the other. Only once since 1920 has this come close to happening, in 1960, when then-Senator John F. Kennedy carried Texas, Democratic vice-presidential nominee Lyndon Johnson’s home state, by just two points. Without Texas, Kennedy’s victory over then-Vice President Richard Nixon would have been razor-thin, with Kennedy winning only nine electoral votes more than a majority. (Nixon strongly considered suing for a recount in Texas and Illinois, both close states that may have been subject to voter fraud, but eventually decided against it.) However, Texas’ Democratic vote that year cannot necessarily be attributed to Johnson’s presence on the ticket. Almost the entire South voted for either Kennedy or Virginia Senator Harry Byrd, and while the national popular vote swung 15.6 points Democratic between 1956 and 1960, Texas lagged behind, only becoming 6.5 points more blue. 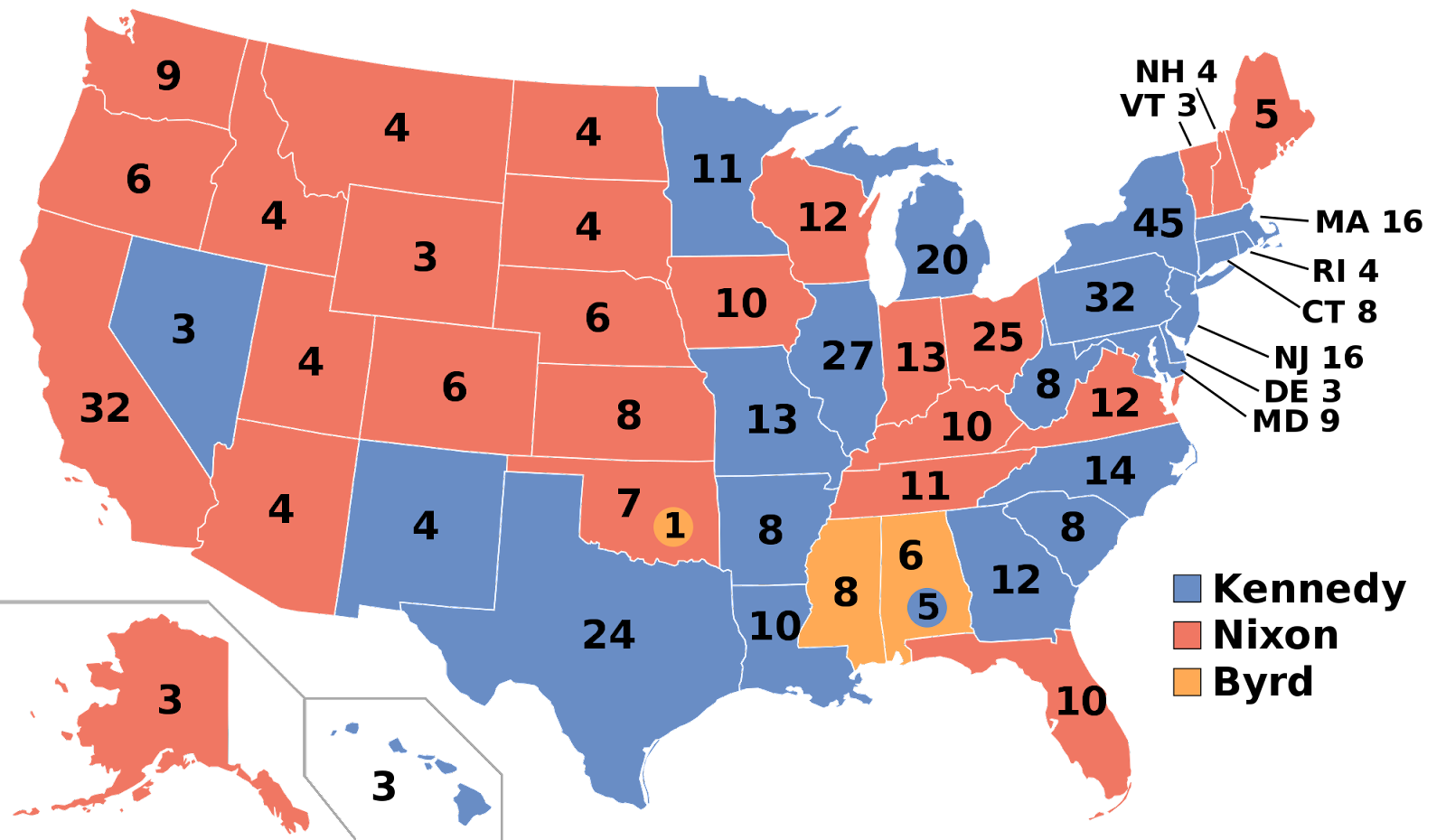 The election of 1960. Texas, Democratic vice-presidential candidate Lyndon Johson’s home state, is thought to have carried the Democratic ticket over the finish line along with Illinois.

However, just because there are few historical cases of candidates in close races picking vice presidents from swing states does not mean Biden will not do so this year. If Biden is looking to make history in this way, his VP would have to come from a close state where a small statewide difference could change the outcome of the election. He is already considering a number of such women: Prominent options include Demmings, Wisconsin Senator Tammy Baldwin, Atlanta Mayor Keisha Lance Bottoms, or Georgia's Stacey Abrams, all of whom come from large, fairly purple states Biden is hoping to win. Commonly-discussed candidates from Democratic strongholds, like California Senator Kamala Harris, might improve Biden’s standing in the popular vote but would likely have no effect on the final map itself.

Vice presidents also matter in ways that have nothing to do with electoral math, but rather what they say about the ticket itself. John McCain likely severely damaged his White House aspirations in 2008 by picking Palin, who was initially more popular than either presidential nominee but quickly became viewed as unpolished and inexperienced. A month before the final election, a full 59 percent of voters thought Palin was unqualified to be vice president, and “nearly a third of voters polled said the vice-presidential selection would be a major factor influencing their vote for president.” These voters ended up “broadly favor[ing] Senator Barack Obama, the Democratic nominee.” 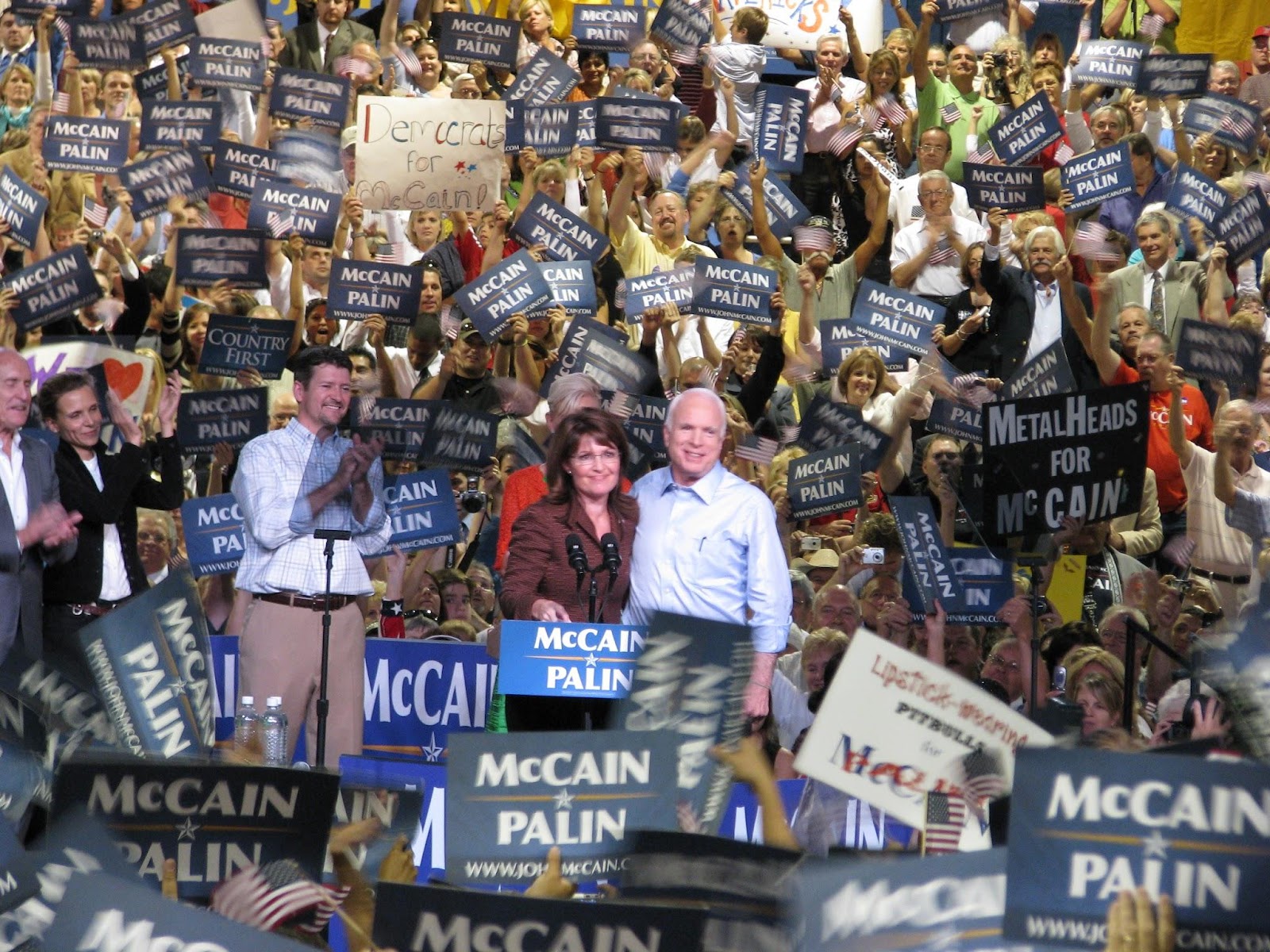 Palin’s reputation as under-informed and unprepared contrasted strongly that year with Obama’s selection of Biden, a D.C. insider thought to bring experience to Obama’s aspirational run. An August 2008 New York Times article explains that Biden’s selection was partly due to Obama’s hopes to “address persistent voter concerns about his level of experience, especially on national security.” That tactic apparently worked for Obama — the same poll that found Americans thought Palin was unprepared found that nearly three-quarters saw Biden as qualified for the job.

A good vice-presidential choice can therefore bring expertise to a less experienced presidential nominee, as Biden did in 2008 and Pence did for Trump in 2016. However, the Palin story demonstrates the potential dangers of inverting that equation; a poor choice can alienate voters and raise questions about the candidate’s judgement. Some have criticized Stacey Abrams, who has never held statewide or federal office, on these grounds.

The women allegedly on Biden’s shortlist vary considerably in nationwide recognition and popularity. Predictably, the ones who contested Biden in the primary are the most well-known and therefore among the most divisive. More than one in nine Democratic voters describe a Harris or Elizabeth Warren vice presidency as “unacceptable.” Only Gretchen Whitmer, the Michigan governor who gained national fame after the onset of the coronavirus pandemic for her public feud with Trump, also breaches that threshold. In fact, the majority of Democratic voters do not have well-formed opinions on many of the possible candidates, providing Biden with an opportunity to attempt to shape the public perception of his ticket by selecting a lesser-known — albeit not unqualified — vice-presidential nominee. As McCain experienced with Palin, this could be risky, but it also could pay dividends by injecting newfound interest into the Biden campaign.

Biden may also hope to reach out to certain groups of voters with his selection. In light of the mass protests following a white police officer’s public killing of George Floyd, Minnesota Senator Amy Klobuchar withdrew her name from consideration and called on Biden to select a nonwhite woman. “After what I’ve seen in my state and after what I’ve seen across the country,” Klobuchar said on MSNBC, “this is a historic moment, and America must seize on this moment. I truly believe, as I told the vice president last night, that this is a moment to put a woman of color on that ticket.”

However, just selecting a Black woman is not guaranteed to turn out the Black vote. Senator Harris is frequently touted by pundits as a possible bridge to the Black community. However, she struggled with Black voters during her own presidential run and underperformed Biden among that demographic, weighed down by a controversial past as a prosecutor. The idea that she could turn out Black voters for Biden is undermined by the fact that such voters overwhelmingly preferred Biden to Harris in head-to-head matchups against the president during the primary.

Harris does not appear to have improved her standing in the Black community over the past year. A late April CBS News poll asked who Biden should consider for vice president and found that Black Democrats disproportionately supported Abrams and former National Security Advisor Susan Rice, but not Harris or Warren, whom they supported no more than white Democrats did: 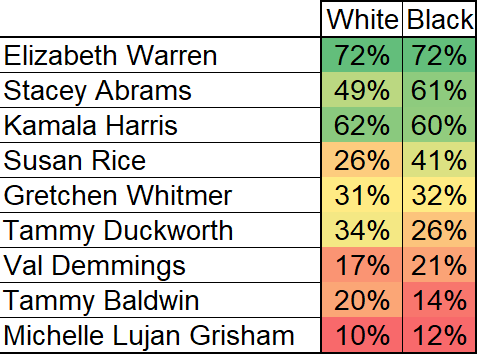 Percent of Democratic and lean-Democratic voters who think Biden should consider each option as his vice president, broken down by race.

Another group Biden may wish to reach out to is young adults, who lean to the left but are less likely to vote. Americans between 18 and 34 years of age largely dislike Biden — his favorability among this group is only 35 percent, with 51 percent unfavorable — but they dislike the current president more, 31 percent to 59 percent. This combination makes them among the demographic groups feeling “least motivated” to vote: One in five describe themselves as only “somewhat” motivated or “not at all” motivated to cast a ballot in November. If Biden can appeal to these reluctant young people, he could potentially mobilize one of the largest demographics in the country to support him.

Young people tend to be less aware of politics in general, and as such they recognize fewer of the names on Biden’s short list. Those who have formed an opinion largely favor Warren, Abrams, Whitmer, and Illinois Senator Tammy Duckworth, and disproportionately disapprove of Harris and Rice: 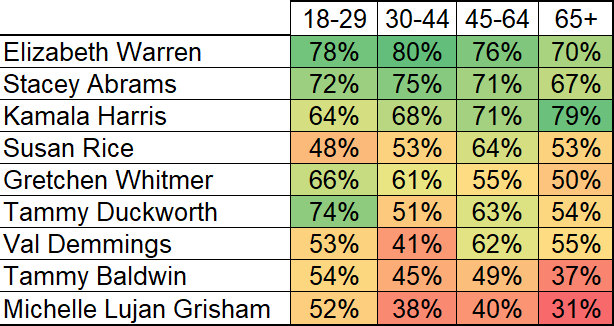 Perhaps the most important role of the vice president, especially when serving under an older president, is a passive one: being the person just “a heartbeat away from the presidency.” This was the litmus test that Palin failed in the eyes of the American public, and Biden’s eventual choice will face intense scrutiny for their ability to govern given Biden’s age. At 78, Biden would become the oldest president in American history, a few months older than Ronald Reagan was when he left the White House in 1989. Because of this, Biden’s vice president would need to be clearly capable of running the White House from day one. She would certainly be one of the frontrunners for the Democratic ticket in 2028 or, if a President Biden decided not to run for reelection at almost 82 years old, in 2024. Voters acknowledge this; the CBS News poll found that 82 percent of Democratic voters, including 88 percent of Black Democrats and 91 percent of Democrats age 65 and older, thought it a “high priority” that Biden’s VP pick be “ready to become president, if needed."

Whoever Biden picks, whether she is Black or white, experienced or a newcomer, or from a swing state or a Democratic stronghold, must look not just like a vice president, but like a president as well. She will be the assumed frontrunner in four or eight years, and as such she will be a fundamental part of what Democrats stand for. Biden has called himself a “bridge” to a new “generation of leaders.” In selecting a vice-presidential nominee, he will finally and decisively have the opportunity to show who he wants those leaders to be—and in doing so, he will attempt to define the Democratic Party not just through 2020 and 2024, but in the decades beyond.

Jake Biderman is a fourth-year political science major interested in law, journalism, and governance. He has worked for outlets including the Des Moines Register and Fox News, covering the Democratic primaries and a Democratic presidential debate. When he’s not worrying about Americans’ critical thinking skills, he’s exercising, learning foreign languages, or watching baseball. Go Nats!