The Smart Intermediate School is what you would imagine—a hulking, angular building smattered with brightly lit windows. I blink away the glare as my fellow Gate writers and I walk around the back of the school. We are in the D14 precinct in Davenport on February 3, the day of the Iowa caucuses.

The five of us find the correct entrance and line up. We’re all registered observers, but upon arriving at Smart Intermediate, we realize we would have had no issue getting in on our own. I shake hands with a couple of Iowans organizing this caucus and jot down my name on a slip of paper. It’s warm inside, so I take off my coat and look around the room. We’re in a school cafeteria plastered with inspirational quote posters now obscured by campaign signs. I see that Senator Elizabeth Warren’s table is set up in the far corner, probably the most put-together of the bunch, with mint green balloons and a bucket of chocolate labeled “Wealth Tax.” Besides Warren, I spot supporters for former vice president Joe Biden, Senator Bernie Sanders, Tom Steyer, Andrew Yang, Mayor Pete Buttigieg, and Senator Amy Klobuchar. 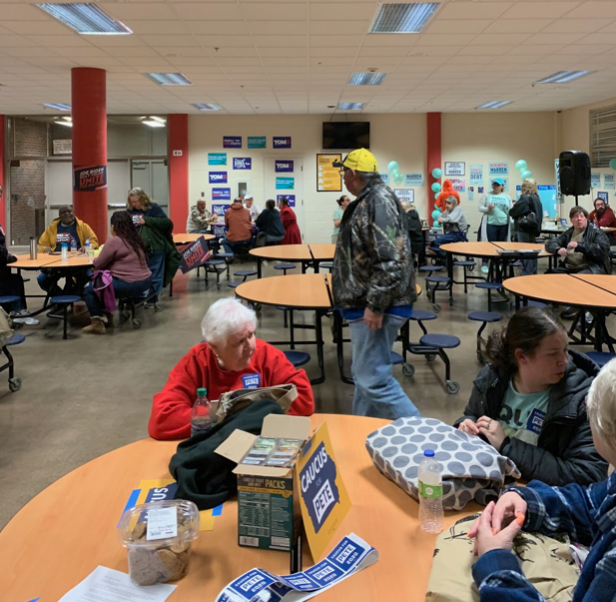 Since I had decided to follow Davenport’s Yang Gang this evening, I square my shoulders, throw my coat across the crook of my arm, and walk over to the small group congregating beside a primary-colored pillar and a sign bearing Yang’s name. My lips quirk into a smile when I read bold-lettered “MATH” on the signs strewn across their table.

Earlier that day, my co-writer Maddie and I stopped at Yang’s campaign office in the outskirts of Davenport. It was just after 3 p.m., but we walked into a room cluttered with empty pizza boxes and limp streamers hanging from the ceiling. It looked like we’d missed a party. A volunteer told us that Yang had made a surprise visit a few hours before we arrived. I deflated at the missed opportunity to hear from the candidate himself.

Whether it was due to Yang’s rousing speech a few hours prior or the unseasonably warm weather that hit Iowa that weekend, the handful of volunteers in the office, excluding one campaign staff member, were eager to talk to us. Before I had the chance to ask, Dillon Rhomberg approached me. A tall Oregon native with a huge smile and laid back demeanor, he’d just arrived in Iowa after getting the week off of work. He had no other plan for the week besides doing everything in his power to get Yang elected. During our conversation, I was struck by just how firmly Rhomberg believed in his candidate.

Pausing briefly, Rhomberg hands Maddie a copy of Andrew Yang’s book—The War on Normal People—and told me that while researching candidates he, “realized … his [Yang’s] humanity first was super important to me because … we've driven so far from that.” Yang’s perceived depth of understanding and common humanity was expressed by many throughout the evening.

“He owes no one anything,” says Rhomberg with a wave of his hand. Like many Yang supporters, Rhomberg acknowledges that most people live in the middle of the political spectrum, and he himself doesn’t care much about party affiliation. What matters is the $16.7 million that Yang raised in the fourth quarter, the “Freedom Dividend,” or Universal Basic Income, which would give each American over the age of eighteen $1,000 a month, and the Yang “aunties” of Davenport who regularly sent food and help to volunteers at the campaign office.

I thank Rhomberg, who turns to talk to Maddie for a while longer, and check my phone transcription. There are a few more people scattered around the office, and I approach a young man sporting a “Yang Gang” t-shirt.

Maddie and I talk with the volunteers for a little bit longer, and Rhomberg, ever helpful and enthusiastic, gives me the name of another organizer, Amber Fudacz, to call on our way out. Fudacz picks up quickly and soon launches into a detailed analysis of Yang’s policies, mentioning the Freedom Dividend, Democracy Dollars, and a collection of other finely-tuned talking points. I knew instantly that Fudacz would become my Yang policy guru.

Fudacz has lived in Chicago for fourteen years, where she owns a hair salon. As a small business owner, she believes that the Freedom Dividend would allow her to expand her business and generate a broader customer base. Finally, she says with utter certainty, Yang is the “only candidate who can abolish poverty.” I involuntarily raise my brow and ask if I had heard her correctly. I had. Fudacz tells me that the Freedom Dividend will provide lower income people greater economic security, thereby helping to break the cycle of poverty.

She also advocates for one of Yang’s token policies—Democracy Dollars—his proposal that all voters receive one hundred dollars to donate to their chosen political campaign. This plan, Fudacz argues, would radically change politics, insuring that government officials would represent a “deeper root of America” with more people of color and other minorities serving in elected positions. Democracy Dollars would help to mitigate the influence of Super PACs and special interest groups.

At the caucus, the Yang supporters cluster around a cafeteria table. I linger awkwardly next to the group, unsure of how to introduce myself. I shouldn’t have worried. A kind woman with greying blond hair invites me to sit beside her, and I balance precariously on one of the blue plastic stools.

The D14 Davenport caucus goers are a varied collection; young people, including one intrepid sixteen-year-old Warren supporter, elderly people, men and women, employed and unemployed, all gathered together to hold court for democracy.

I start to talk with some of the Yang supporters at my table, and we somehow shift to education policy. I’m curious about Yang’s stance on education, so an older man in a baseball cap who used to teach at Smart Intermediate points me toward Steve Sindt, the precinct captain. Sindt works at Nestle’s Davenport factory seven days a week. I imagine he just got off of his shift before coming to the caucus site—proof in and of itself of his dedication to Yang’s victory.

Sindt catches my eye and walks over from the other side of the table, also in a baseball cap and wearing a yellow plaid shirt. We shake hands, and he sticks his fists in his pockets. He looks nervous and explains that he had already volunteered as a precinct captain before he learned that he’d have to give a speech later. I tell him that this interview is his practice run. With a little prompting, Sindt tells me that his mom worked as an elementary school teacher in Davenport and, though he doesn’t claim to know much about Yang’s education policy, he believes that a lot of issues start in the home. The Freedom Dividend, he says, will generate greater economic stability, thereby improving students’ home life so they can learn better. Sindt adds that Yang’s “human-centered capitalism” sealed the deal for his vote. As Sindt suggests, Yang seems to be able to balance economic growth with an appeal to individual wellbeing.

After the realignment, I talked with Ezra James about his vote. He is a gay, trans, twenty-one-year-old passionate about LGBTQ rights because of its personal significance and the impact on the, “safety of the people that I love.” James is also a vocal advocate for free college, Medicare for All, and helping the impoverished. Wearing neon yellow leggings that match his striking yellow hair, Ezra tells me that he has a slew of mental health issues. He sums up the tension between receiving care and making money that many people face, saying, “can I afford to leave work for a week to try and get the help that I need, or am I just pushing myself until the breaking point?” 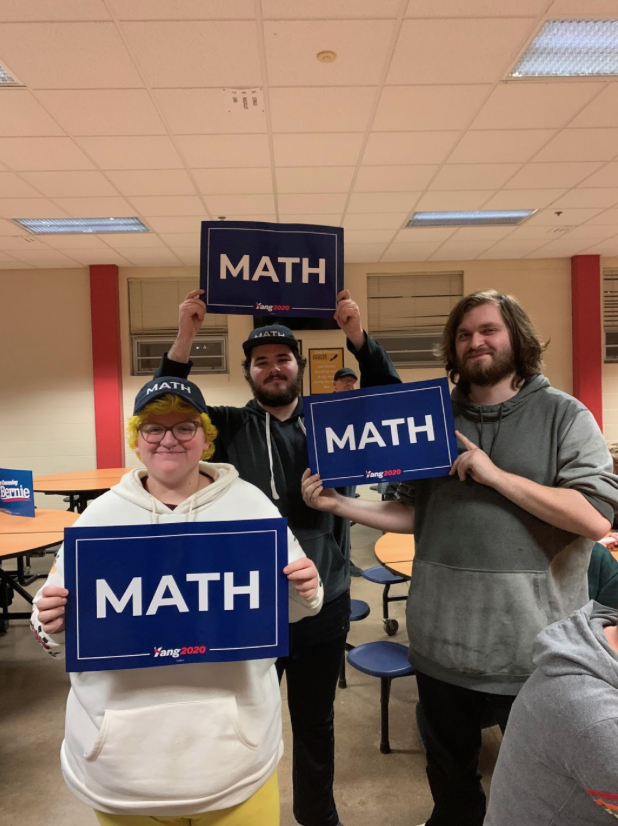 All of the Iowans I talked to focused on systemic poverty, basic care and services, and Yang’s personal appeal. With a population of just over one hundred thousand, Davenport is largely white, middle class, and industrial. About 17 percent of people live below the poverty line and, within the Quad Cities, 11 percent are unemployed. Most of the people I talked to hoped for just a little bit more certainty in their ability to pay for utilities, healthcare, and other necessities. Yang’s Freedom Dividend has gained significant traction in Davenport, likely because a supplementary monthly income would give residents a degree of economic stability that they currently lack.

Furthermore, Yang struck a chord with many of the voters I talked to in addressing their latent fears that growing automation will have “devastating” effects on Iowa’s job market. The Davenport economy relies heavily on manufacturing, retail, and social services, and these sectors will likely face significant changes in the future. To some, Yang’s policies seem like an economic life raft and mount a fierce challenge to a system that has left many Iowans with few options. To his supporters, Yang’s policies seemed like a viable way to end cycles of poverty and, in Fudacz’s words, “uplift everyone.”

Now that Yang is out of the race however, it’s unclear to whom his supporters will turn. Yang, as an outsider and challenge to the establishment, doesn’t have a clear equivalent. Voters will have to choose between the moderate and more radical democratic options available or flip parties. I spoke with Celia Hadden, an engineer who moved from Buttigieg to Yang during realignment, and she says that she wants a candidate who will “make the country safer” and “support people in low paying jobs.” Those I spoke to, in general, seek an economic vision rooted in a capitalist view of the world, poverty reduction plan, and a charismatic leader. Only time will tell for whom Yang’s supporters cast their votes.

Katherine Leahy is a Contributing Writer for The Gate. The images featured in this article were all taken by the author.

Katherine Leahy is a second-year Political Science major who spent the summer working as an AmeriCorps volunteer in the Rocky Mountains. On campus, she sings in the University Chorus, serves as a Chicago Swing Dance Society board member, and works as a research assistant. In her free time, she enjoys fiction, hiking in places with real elevation, mediocre coffee, and exploring Chicago with her friends.