On September 3, a member of UK Prime Minister Boris Johnson’s political party dramatically changed the country’s political calculus when he defected to another party during Johnson’s speech in Parliament. The party member, Phillip Lee, walked across the floor of the room and sat down with members of the opposition party, stripping Johnson of his Parliamentary majority. It was a theatrical event that would make little sense to someone not well-versed in British politics. In that sense, it was similar to Brexit itself.

Since that turning point, the legislative and judicial branches of British government have dealt Johnson humiliating defeats. A hard-line Brexit supporter, Johnson has said he wants to take the UK out of the European Union by October 31, even if he cannot reach a deal with Parliament that protects the UK during the divorce. In the last few weeks, Johnson ignited controversy when he announced the suspension of Parliament in order to deliver a final plan for Brexit on October 31. UK lawmakers immediately challenged the suspension, and the Supreme Court overturned the suspension just two weeks after it began.

For those who have not followed every detail of Brexit since the earth-shattering 2016 referendum, attempting to understand the current state of UK politics can be daunting. New events that change the conversation surrounding Brexit seem to arise every day. This article will explain how the UK got to this point and present a few possible outcomes, with the October 31 deadline fast approaching, and what they would mean for the UK.

On June 23, 2016, the UK shocked the world when it voted in a referendum to leave the European Union. Over the next three years, the country would find that leaving the EU would be easier said than done. After the referendum, former Prime Minister Theresa May came to power with the promise to take the UK out of the EU with a deal that protected the country’s interests. After three years with no success, May stepped down in July.

The greatest obstacle to Brexit so far is the controversy surrounding the Northern Ireland border. This point of contention has been mostly responsible for causing lawmakers who support Brexit to reject May’s Brexit plan, stalling the entire process. Northern Ireland is one of the constituent countries of the UK, meaning it has autonomy on some legislative matters but is part of the country of the UK. Northern Ireland sits on the same island as the Republic of Ireland and thus shares a land border with the nation, as shown in the picture below. 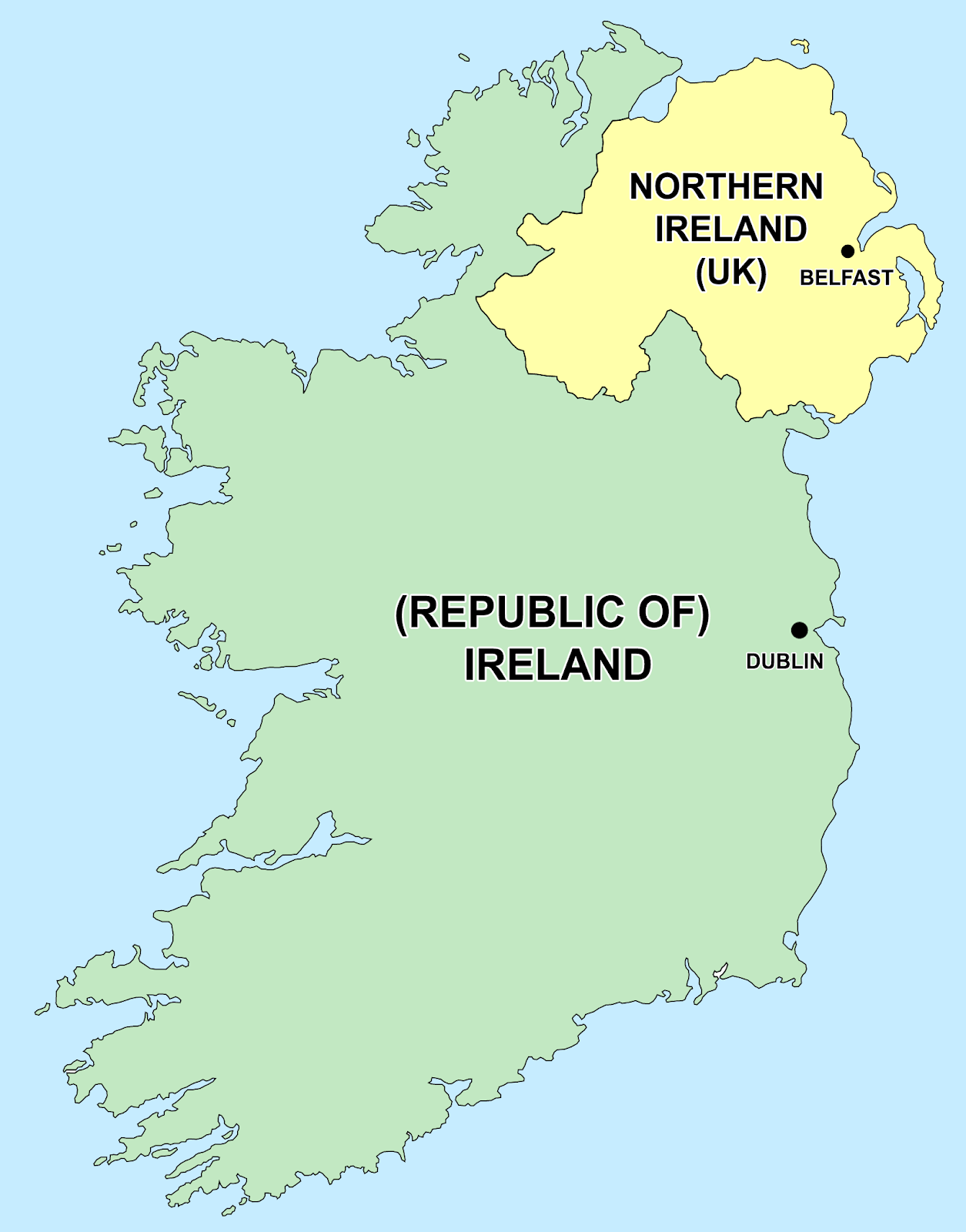 The UK’s overland border with the Republic of Ireland, a huge point of contention in Brexit negotiations.

This geography has posed a huge challenge for Brexit. The border between these two countries was highly militarized during the Troubles, a period of conflict between the British Army and the Irish Republican Army from 1968 to 1998. The border was contentious because the Republic Army believed Northern Ireland was rightly a part of the Republic of Ireland, while the British believed it belonged to the UK. The Good Friday agreement in 1998 led to the demilitarization of that border. It ultimately left Northern Ireland to the UK but made travel between citizens of the two countries virtually unrestrained over the border.

Brexit has thrown that agreement into question. The EU requires customs checks at borders with non-member countries—which means that, if Britain leaves successfully, the border will need to be controlled once again, as Ireland would remain in the EU. Prime Minister May tried to circumvent this with a “backstop” agreement, which stipulated that the UK would remain in the EU’s customs union from 2020 until it could come to a deal that avoided a hard border with Ireland. This was unacceptable to Brexit supporters because it meant the UK would still be indefinitely beholden to EU rules, essentially not a true exit.

Parliament voted down May’s proposition three times, making her unable to deliver Brexit by the March 31, 2019 deadline she had set. After a deadline extension to October 31, May resigned in May. This set the stage for a new Prime Minister who would take a more aggressive, hard-line stance on Brexit.

Johnson replaced May as Prime Minister in July and has since taken a vastly different approach to securing Brexit. Johnson said he wants to take the UK out of the EU by October 31, even if he cannot pass legislation in Parliament that would protect the country during the split. The idea of Brexit at all costs has galvanized Johnson’s supporters and terrified his opposition, who would prefer an extension to the October 31 deadline to try to reach a better deal.

On the one hand, Johnson argues a “no-deal Brexit” would be better than any kind of delay because the people of the UK have waited long enough for the results of the referendum to be realized. On the other hand, the uncertainty that would result from a no-deal Brexit could lead to chaos. The UK is tied to the EU in many ways: 75 percent of its medicines come via the EU, 1.3 million UK citizens live in the EU, and its housing, food, and several other markets are closely connected. Without clear guidelines protecting the UK, Johnson’s opponents worry the split will wreak havoc on the British economy and way of life.

Ignoring these reservations, Johnson resorted to extreme measures to get Brexit done by the October 31 deadline. He ignited controversy when he announced he would suspend Parliament for five weeks before the deadline. Johnson said the suspension was to hold a Queen’s Speech—a tradition where the Queen of England gives a speech laying out the legislative goals for the next Parliamentary session. Parliament must be suspended before the speech. However, the timing of this suspension would have prevented Parliament from deliberating on a deal before the Brexit deadline.

Before its suspension, Parliament quickly moved to tie Johnson’s hands. When Lee dramatically left Johnson’s Conservative Party, Johnson lost his majority in Parliament. As of now, Johnson’s team has purged twenty-one lawmakers from his party who have indicated that they would not support a no-deal Brexit. He has tried twice to call for new general elections to bring back his majority, but Parliament rejected both calls. This newly oppositional Parliament passed a bill to prevent the UK from leaving the EU on October 31 if a deal is not reached. That bill meant that even if Parliament had remained suspended, Johnson could not have enacted a no-deal Brexit on October 31.

Parliament returned to session on September 25. Johnson can no longer enact a no-deal Brexit, nor can he hold another election. Parliament also passed a law forcing the Prime Minister to request a deadline extension from the EU on October 16 if a deal cannot be reached in time. Just two weeks ago it seemed possible that the UK would come crashing out of the EU without a deal, but members of Johnson’s own party have prevented that possibility from becoming reality.

Johnson has said he would rather be “dead in a ditch” than ask the EU for a deadline extension. Yet, as things currently stand, asking for an extension is Johnson’s only option, short of resigning. If he does ask for an extension, it will surely draw the ire of his party’s hardliners and lead to claims of a broken promise.

In the event that Johnson resigns, another rapid series of dramatic events would likely unfold. With no Conservative majority, his successor would have to come from one of the opposition parties. Jeremy Corbyn, as leader of the largest opposition party, the Labour Party, would be the most obvious choice. Yet a recent poll found that a no-deal Brexit is more popular among Britons than the idea of Corbyn as Prime Minister, meaning this replacement would not sit well with many. Party leaders might only back Corbyn if he promises to call a parliamentary election after requesting and getting a deadline extension. In that case, both the Conservative and opposition parties would have to make considerable effort to form a majority coalition in Parliament.

In a story of unending twists and turns, new developments have the possibility to change the course of Brexit dramatically. For now, it seems likely the October 31 deadline will be extended. Yet extending this deadline does not end the possibility of a no-deal Brexit, only postpones it. When that new deadline comes, Johnson, or a completely different government, will likely have to devise a more stable, reliable strategy for delivering Brexit.

Australia’s Wildfires and Our Need for Grassroots Climate Activism

A Chaotic Night in Des Moines

Whither Brexit: Contentions to be Settled in the Transition Period