President Zimmer’s closing remarks, on the state of freedom of speech on college campuses, could barely be heard over the roars of the protestors outside.

One could not imagine a better summary of the state of the University of Chicago’s campus than Thursday night’s Student Forum with President Zimmer and Dean Boyer. The result of a year’s worth of work by fourth-year Chase Harrison, the event became a battleground for the most controversial issues of the day. And unsurprisingly, the non-fatal shooting of fourth year Charles Thomas came to the forefront. 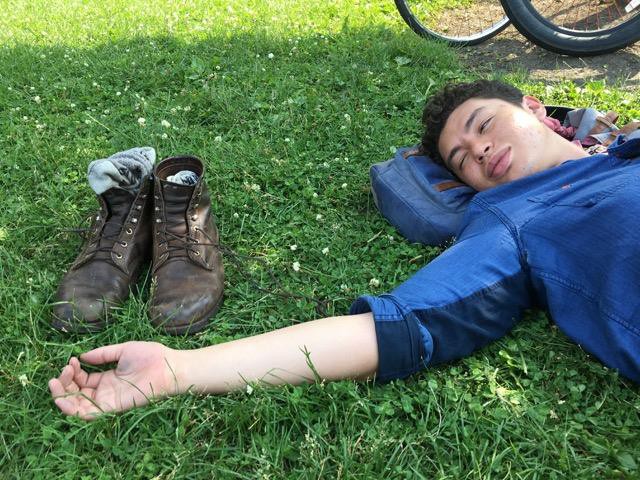 Fourth-year Charles Thomas, who was shot and injured by UCPD officers last Tuesday. Photo was provided by one of his friends; the original can be found here.

48 hours after the shooting, and 24 hours after the release of body-camera footage, questions remained about what happened on the night of April 3rd. First reported by The Maroon, Thomas was in the throes of a psychiatric episode when he was confronted by the UCPD that night, after smashing the windows of an apartment building and several cars along S Kimbark Avenue. According to the UCPD, Thomas was fired upon after charging an officer.

Video is courtesy of The Maroon. WARNING: Content may disturb some viewers.

Zimmer and Boyer had little to add on the incident. Boyer, for his part, responded to a question about the mental health resources by remarking “this has always been a campus where people work really hard, there’s a lot of academic stress” before going on to cite “extensive support services for students”. Zimmer, meanwhile, responded to a more direct question from David Axelrod (who moderated the event) about the “appropriateness” of the officer’s actions by referring to the ongoing investigations by both the CPD and UCPD. Personally, he stated he was “not in a position” to pass judgement on any actions taken.

Others, however, were more willing to speak on the subject. Professor Craig Futterman in the University’s Law School, who was in attendance that night, and spoke to Gate reporters after the event. Along with being a former trial lawyer specializing in civil rights, Futterman is best known as being instrumental in the release of the infamous Laquan McDonald tapes.

Though he qualified each of his statements, stating several times “I don’t know all the facts,” he did raise several questions about the UCPD’s response on Tuesday night. Specifically, he wondered aloud about the resources the UCPD had at their disposal, and why they approached Thomas as quickly as they did, explaining “Generally, officers should be trained to assess the situation when arriving, and be in a position where they’re close enough to act if someone is in danger (and assess whether there is anyone in immediate danger), but also not closer than they need to be.” Similarly, he questioned the intonations of the officers commands, remarking “I don’t want to pretend to be a psychologist or mental health expert, but among the things I do know is something that’s generally seen to be unproductive when someone is in crisis is barking out orders and commands."

On the shooting itself, however, he had a mixed reaction. He maintained that “there are still ambiguities in terms of perspective of the video,” but observed “if you’re focusing on the law alone, it’s generally going to allow the use of deadly force in that situation.” He also said the shooting “shows more restraint than I’ve typically seen in deadly force situations,”  referencing the shooting of Stephon Clark in Sacramento and Saheed Vassell in New York. Another Professor at the Law School, who wished to remain off the record, echoed Futterman’s critiques but added that the officer’s extensive retreat indicated some form of intervention training, since “retreat has not been the typical m.o. for police in this kind of encounter.”

Both Professors, however, were more concerned with the larger implication of the shooting. As Futterman said in closing, “At the end of the day, I’m left with a number of questions. And the questions are more about University response to people who are in mental health crisis, which is not just policing but also the adequacy of Mental Health Services for students and others in crises.”

Such larger themes were also the focus of the protesters outside. Made up of activists from several organizations, most significantly the Graduate Students Union and Reparations Now, they were united in discontent with the University’s administration. Professor Guy Emerson Mount, who taught Thomas in a seminar on the history of Hip-Hop, told Gate reporters the collective had formed because “the University of Chicago has proven itself as a bad actor in a number of arenas.” He also connected Thomas’s shooting to the UCPD’s history of racial bias (Thomas is part black and part Japanese); in closing he remarked that he hoped “if nothing else, students understand this is part of a systemic pattern.”

The willingness with which the event’s attendees, both inside and outside, engaged with the uncomfortable and painful issues facing the University only seemed to highlight Boyer and Zimmer’s refusal to. Harrison, the event’s organizer, reflected after the event “I am proud of how students acted during the event...I was disappointed in Zimmer though. I felt he evaded directly answering many questions and several times admitted he did not know about several topics. What he displayed was far from the exemplary leadership he is heralded for in the press.” Whether the administration’s reticence is right or wrong, one thing seems certain: the campus is tired of its silence.

Brett Barbin and Dylan Wells contributed reporting to this piece. A full transcript of Professor Futterman's comments can be found here. A grammatical correction was made on 5/14.