Maybe it was too good to be true. In the summer of 2017, Chicago Public Schools announced that Englewood would soon be home to a new high school, an $85 million project set to open in the fall of 2019. The new high school will have a host of new sports fields, and its curriculum will focus on STEM and preparing students for postsecondary education. The new school will also offer the international baccalaureate program, dual-credit enrollment, career and technical education, apprenticeships, internships, and externships.

And yet, in what is becoming an inevitable cycle for Chicago Public Schools, the renovations come at a cost. In order to build the new school, CPS announced, four of Englewood’s existing high schools would be closed in the summer of 2018, leaving their students to find other schools to teach them for the next three years.

“If you all knock this down, where are we going to go?” asked Robeson High School junior Jakil Benson in an interview with the Chicago Tribune.

Eventually, CPS would decide to “phase out,” rather than outright close, the four schools, but at first their answer was that students should relocate to one of four neighborhood schools—Chicago Vocational, Bogan, Phillips Academy and Gage Park—whose boundaries had been extended in order to accomodate students leaving the four closing high schools. Robeson, along with Hope, Harper, and TEAM Englewood high schools, has been struggling in recent years. Harper, Hope, and Robeson are among Chicago’s most under-enrolled, underperforming, and underfunded schools. This past fall, the four schools enrolled only 450 freshmen between them. Additionally, nearly four thousand students who live in the boundaries of the four schools chose to go to a different school. U.S. News estimates Robeson to have the lowest graduation rate, at 41 percent (Harper has 63 percent, Hope has 68 percent, and TEAM Englewood has 91 percent).

Although their numbers are small, students and parents at the four Englewood schools are a force to be reckoned with in advocating for their education. In the wake of the announcement, students, parents, teachers, and organizers began protesting against the closings of their school. Crowds of students and parents flooded into three community meetings to beg officials to keep their schools open. Elected officials marched to City Hall to advocate to keep the schools open.

"Low-income, black children continue to bear the brunt of CPS's failure with its reforms,” said State Senator Jackie Collins at the rally. “It's long past time for CPS to become responsible by establishing a serious, long-term effort to evaluate programs based on scientific methods, evidence and sound educational services so that we stop damaging children.”

The protests escalated leading up to a February deadline by which the Chicago Board of Education would vote on the proposal. The protests appear to have worked, because on Monday, February 12, CPS officials announced that three of the schools—Harper, Hope and TEAM Englewood—would be phased out rather than shut down. Students at the three schools will have the option to continue to attend their schools, but no new freshmen will be admitted. By the time the current freshman class graduates, they will be the only students in the schools. Robeson will still be shut down this summer, however, as the new project will be built on its site. 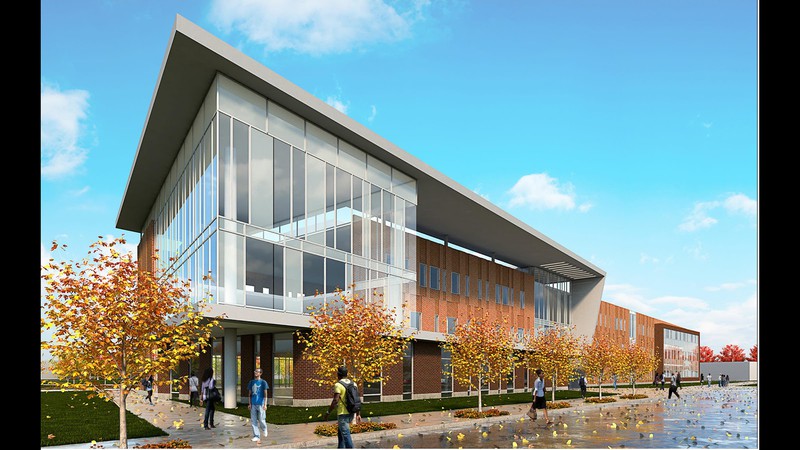 A rendering of the new $85 million high school that will be built on the site of Robeson High School in Englewood.

The Chicago Teachers Union, which had been campaigning against the school closures, proclaimed their support of the new plan. However, they expressed concerns that the quality of education at the schools would suffer from the move. CTU leaders called for the district to invest more resources in the schools to support the students who choose to remain. However, the boundaries of the schools that were intended to receive students coming from the closing schools will still be extended so that parents can choose to send their children to those schools.

The need to ensure that students who remain in the phase-out schools remain funded and functioning was a common response to the announcement of the phaseout. Alderman Roderick Sawyer of the 6th Ward, which serves much of Englewood, said that he felt that the students of his ward would have been better served by the original plan, in which profiles would have been created for each student, and they would be matched with a school in the surrounding area.

However, despite the criticism of the new phaseout plan, students who have spent their high school careers at Harper, Hope, and TEAM, have shown their enduring love for their schools and their classmates.

“We have our ups and downs, but y’all are going to take this school away from us and knock away all of Paul Robeson’s history, all the paintings that are on the walls, all the love that’s throughout the school, all the friendships,” Robeson student Kenneth Bowman told the Chicago Tribune.

In a community that has been continuously underserved by government and business alike, trust is a major part of the $85 million school construction project. How developers plan for students’ futures and take their wishes into account as the process continues will shape the dynamic of trust and suspicion between Englewood and Chicago’s institutions in the coming years.

“If we can really wrap our hands around these kids, these forgotten kids, to really show them that we do care about their high school experience and future education career,” said Asiaha Butler, president of the Resident Association of Greater Englewood, “that is going to be really crucial to this transition to make the people of Englewood even trust the district or the city of Chicago in any way.”

The image featured in this article are licensed under the Creative Commons; the original can be found here.