Hours after Attorney General Jeff Sessions announced the end of Deferred Action for Childhood Arrivals (DACA), hundreds of protesters took to the streets of Chicago in response to the controversial decision. DACA, an immigration policy established under the Obama Administration in 2012, allows undocumented immigrants who meet certain criteria to apply for a renewable permit which shields them from deportation for two years.  DACA enrollees must have arrived in the U.S. before they were sixteen, have been below the age of thirty-one when the program began, be enrolled in school or have a high school degree, and have a clean criminal record or only minor offenses. These immigrants are often referred to as “DREAMers;” and with the Trump Administration’s Tuesday decision, they are left in a precarious situation.

DREAMers’ namesake stems from the DREAM Act, a proposal which has bounced around congressional chambers since it was first introduced in 2001 by Illinois Senator Richard Durbin. The bill, which would shield such immigrants from deportation, has been defeated time and time again on the floor in the House and Senate, in part because it was often attached to broader and more controversial immigration reform. Its repeated failure prompted former President Obama to invoke his executive authority to protect this particular group during his administration. With DACA, successful applicants were not only shielded from deportation, but could receive work permits and valid drivers licenses nationwide. As of 2017, nearly eight hundred thousand individuals were registered with the program, although most estimate that 1.5 million are eligible. According to the Illinois Business Immigration Coalition, over forty-two thousand reside in Illinois. The state has the fourth largest share of DREAMers in the country, and the highest share by a wide margin in the Midwest.

Chicago’s citywide outrage was, therefore, unsurprising. As public officials like Mayor Rahm Emanuel issued public statements criticizing the President’s decision, hundreds gathered in Chicago’s Federal Plaza before marching south to 101 W. Congress Street, where Chicago’s federal immigration services’ headquarters is located. Loosely organized by Protection for All, a Chicago-based movement advocating for undocumented immigrants’ rights, the protest included representatives from many groups. Among them was Carlos Luna, the president of Green Card Veterans. A charter under the League of Latin American Citizens (LULAC), Green Card Veterans advocates on behalf of veterans and veteran families at risk of deportation. Luna, a veteran himself, described his program as defending “discarded veterans” who “were not afforded care upon return” and often times lose their legal status following criminal convictions. As Luna noted, these convictions are often for nonviolent drug offenses; one recent case involved former army officer Miguel Perez, who served two tours in Afghanistan before being arrested with 4.4 pounds of cocaine in 2010. A Green Card resident since he was eleven, Perez was targeted by ICE for deportation. Despite pleading for a pardon from Governor Rauner, as of now Perez remains in ICE custody awaiting deportation proceedings. 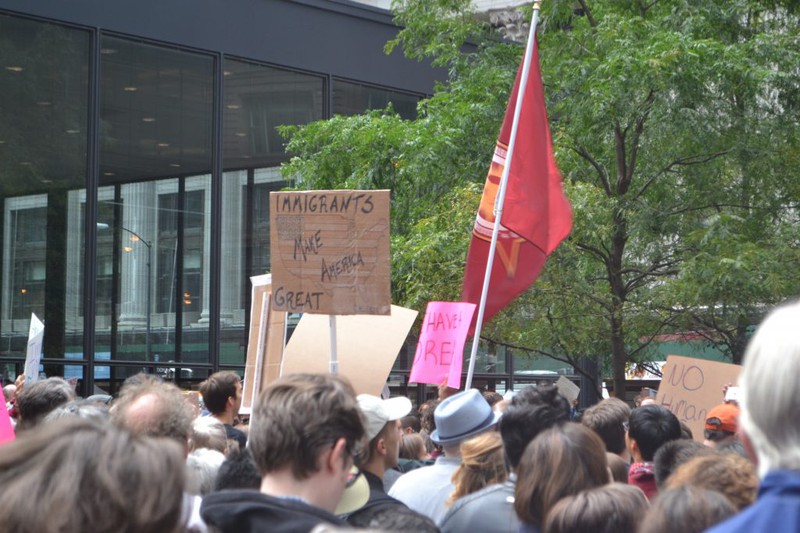 After arriving at W. Congress Street, the crowd, which swelled from a few hundred to two thousand over the course of the evening, gathered in the road as DREAMers shared their stories over a megaphone. Among them was Egle Malinauskaite, a Lithuanian immigrant who crossed the Canadian border in 2000. A DACA recipient, Malinauskaite recounted meeting the President at a campaign stop in Iowa. She says she asked him, “Where would you deport me?” to which she says he “hung his head” and replied, “You should be careful.” 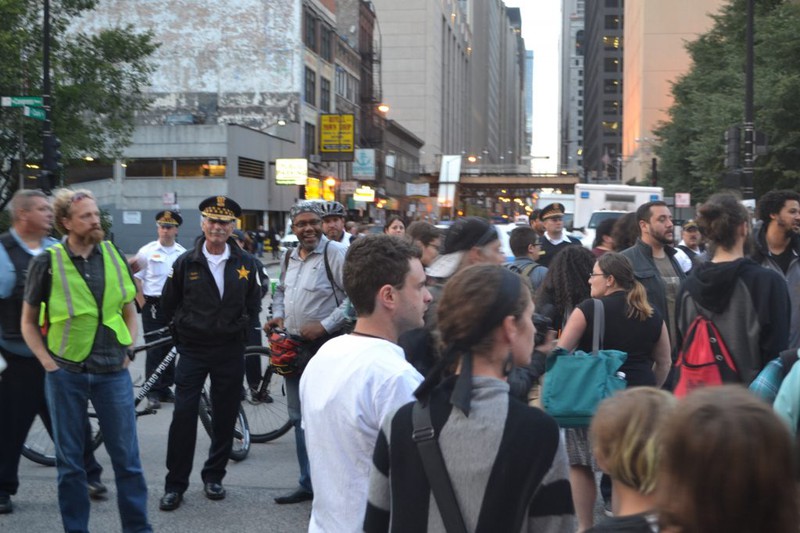 Police blocked off a section of W. Congress as the protest occurred peacefully without any arrests.

Without congressional action, DACA will end on March 5, 2018. This means that the government will stop taking new applications past that date, and not accept renewals from current DACA enrollees (though enrollees with waivers expiring before March 5 have a month to apply for a new two year permit). As existing permits expire, the eight hundred thousand DREAMers currently protected under the program will have to return to their pre-2012 lives: unable to work legally and constantly at risk of deportation.

The harsh reality of the situation was not lost on the attendees. As Luna remarked, there is a “rough fight” ahead. Malinauskaite, for her part, closed her speech with a call for unity. Asking her allies to “stop hiding behind your whiteness” she warned that the fight must be united in order to succeed. As one of the protest organizers put it, the “work has to remain intersectional if we’re going to achieve protection for all.”

For further information on the Trump Administration’s decision, and what it means for DACA recipients, we encourage readers to refer to the Department of Homeland Security’s information brief, and to consult with advocacy groups like the Illinois Coalition of Immigrant and Refugee Rights. All images featured in this article were taken courtesy of the author.

A Conversation with Dr. Abdul El-Sayed

Bernie Sanders and the Fight for the Nomination

The Glorification of the Working Class