Kelly High School has at least two police officers in its school building every day. Assigned to ensure safety on school grounds, in recent months they have become a source of less comfort than anxiety for many Kelly students. According to Cynthia Chavez, a college mentor at the school, their potential to be “given the authority to act as ICE [Immigration and Customs Enforcement] … brings a lot of fear.” The predicament faced by Kelly is far from unique, and it cuts to the heart of the question facing Chicago and Illinois at large: in one of the most hostile environments for undocumented immigrants in recent history, what is the role of local, dissenting governments?

Chicago’s opposition to Donald Trump’s hard-line stance on immigration has been clear since the beginning of Trump’s administration. On November 13, only two days after Trump was elected, Mayor Rahm Emanuel issued a statement reaffirming that “while the administration will change, our values and our commitment to inclusion will not.” This sentiment is shared by many elected officials statewide: in the largely Democratic Illinois General Assembly (ILGA), the refrain “sanctuary state” has been heard time and time again in the past months. But as Illinois, and Chicago in particular, have seen a dramatic spike in ICE raids in response to the enhanced powers granted by the president’s recent string of executive orders, the city and the state have begun to feel pressure to turn their critical rhetoric into concrete legislation.

The Brighton Park Neighborhood Council (BPNC) is among the groups pushing for more definite legislation to undermine federal deportation efforts. An advocacy group nestled in the predominantly Hispanic Brighton Park neighborhood of Chicago’s South Side, they have been lobbying for legislation to make Chicago, in their own words, a “Model Welcoming City.” Building off of a collection of immigrant protections that passed the Chicago city council in October of last year, BPNC has pushed for, among other things, guaranteeing schools and places of worship as spaces safe from ICE raids, granting power to city officials to certify U-Visa and T-Visa petitions (visas specifically designated for the victims of violent crimes to allow them to get help from law enforcement), and establishing clear legislation to ensure that city police officers cannot act as ICE agents. 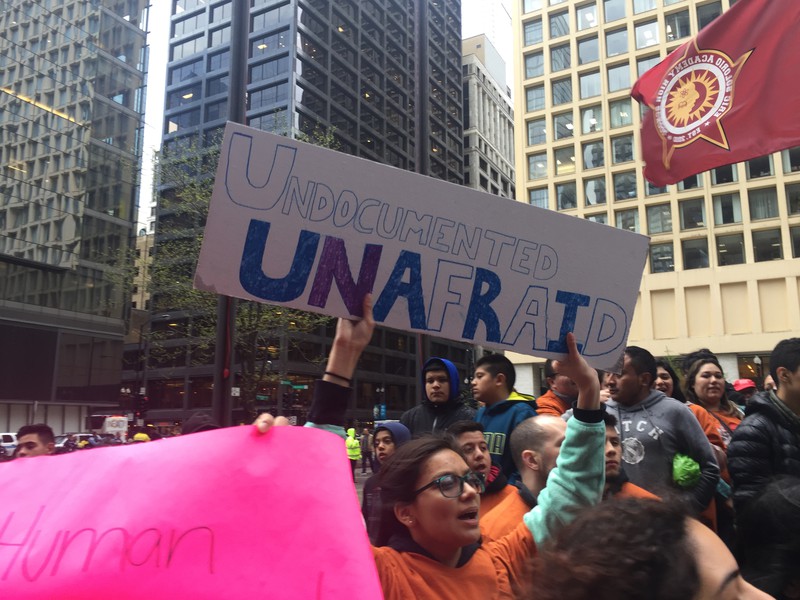 BPNC protestors at their May Day immigration rally.

Andrea Ortiz, an organizer with BPNC, claims these reforms would not only protect undocumented immigrants in Chicago and Illinois at large, but provide clarity on their rights.  Referring to the two police officers stationed in Kelly High School, she remarked, “If ICE does come … what are they going to do? Are they going to cooperate or not going to cooperate?” She went on to say that the lack of specificity by the city and the state has left many asking, “What does it mean to be a sanctuary city?”

While the future of these “Model Welcoming City” reforms remains unclear, Illinois is on the verge of passing one of the most significant pieces of immigration legislation in recent memory. First introduced to the Senate this past January, the TRUST Act (SB31) would restrict cooperation between local police and and immigration enforcement; establish schools, medical facilities, and courthouses as safe spaces from ICE arrests; and ensure that undocumented victims of violent crimes can get U and T Visas. Since its inception, the bill has been praised by immigrant advocates, including BPNC, which, in a statement to The Gate, referred to it as a “great first step towards a more welcoming Illinois.” With the help of overwhelming Democratic support, the bill passed the state senate last week and has moved on to the Illinois House.

The bill’s future, however, remains unclear. Even if it makes it through the House, Governor Rauner has notably refused to comment on the legislation, leaving the possibility of a veto open. Perhaps more importantly, its passage in the state senate has already drawn the ire of conservatives nationwide. A recent Breitbart article, entitled “Illinois Senate Passes ‘Sanctuary State’ Bill to Hamper Immigration Officers,” remarked that “Illinois joins a host of liberal states … in efforts to thwart federal immigration laws.” While these attacks likely do not bother Illinois’s elected officials, what may are the possible consequences of this conservative resentment. Both Trump and US Attorney General Jeff Sessions have, on several occasions, referred to the possibility of withholding funds from states that refuse to cooperate with national deportation efforts. For Illinois, a state with a notorious budget crisis, this threat could have serious ramifications.

Regardless of the eventual fate of the TRUST Act, Illinois’s role in the coming battles over immigration remains to be seen. As the Trump administration barrels into uncharted territory, Illinois, along with a “host of liberal states,” will be forced to reckon with the question of how a local government dissents. Whatever the answer, their resistance will have serious ramifications, for their residents and for the country at large.

The images featured in this article are courtesy of the Brighton Park Neighborhood Council.

A Conversation with Dr. Abdul El-Sayed

Bernie Sanders and the Fight for the Nomination

The Glorification of the Working Class