On September 7, Amazon announced it was looking for a location to build its second corporate headquarters, sending cities nationwide into a scramble to appease the tech giant. Promising fifty thousand jobs and over $5 billion in infrastructure spending, “HQ2” has sparked the interest of nearly fifty cities, including Chicago. To present a competitive bid, Mayor Rahm Emanuel assembled a six hundred-member committee, chaired by an impressive lineup of corporate CEOs and local leaders in business, technology, education, and civic engagement. Chicago submitted its proposal on October 17, and Amazon is expected to announce its decision in early 2018.

Chicago’s Midwestern location, big-city amenities, and low cost of living make it a legitimate candidate in the race to land HQ2, but what can Chicagoans not employed by the tech giant expect to gain from Amazon’s presence, and what might they lose?

Beyond the simple promise of big infrastructure spending, Amazon could significantly diversify Chicago’s labor force and make regional tech companies more competitive. Dr. Austan D. Goolsbee, former Chairman of the White House Council of Economic Advisors and current Robert P. Gwinn Professor of Economics at the University of Chicago’s Booth School of Business, sees this as a huge boon to the area. A member of Rahm Emanuel’s council, he believes “[Amazon coming to Chicago] would probably make a material change in the share of technical graduates from the ‘Big 10’ that choose to stay in the area rather than relocate to somewhere else.” Midwestern STEM graduates will be attracted to Chicago because of career potentials at Amazon, but even if they do not find employment there, they could work for one of the many regional tech startups that Amazon is likely to draw to the city. This new influx of skilled workers would rapidly expand Chicagoland’s entrepreneurial scene, leading to more jobs for current locals as well.

With companies such as Yelp, Google, and Glassdoor recently opening offices in Chicago, the addition of Amazon would add a boost to the area’s reputation as a destination for tech talent. In addition to the fifty thousand jobs HQ2 itself would provide, the company’s presence could attract even more corporations to the city and help fully employ its diverse labor pool.

Employment for Chicagoans is the greatest benefit Marie Trzupek Lynch, founding President and CEO of Skills for Chicagoland’s Future, envisions Amazon bringing to the area. Skills for Chicagoland’s Future works directly with employers to find jobs for Chicago residents, so Lynch interacts firsthand with the city’s diverse talent pool that spans a myriad of neighborhoods. Unfortunately, some of these neighborhoods haven’t experienced the recent national, or even citywide, drop in unemployment, but Amazon could help this diversely skilled group reenter the workforce.

Skills for Chicagoland’s Future looks forward to the opportunity to work with Amazon if they were to come to Chicago, employing not only technically skilled workers, but also those without a college degree. Building and running an office so large requires a sturdy support network, so many Chicagoans could find jobs as construction workers, call-center employees, or janitors. In a snowball effect, other companies would flock around HQ2 to service the mass of new workers. Amazon’s presence would increase the city’s service needs, necessitating expanded hotel and retail systems and even an increased healthcare capacity that would, in the process, employ additional thousands of locals. Even though Amazon would directly secure fifty thousand jobs for the area—a huge increase on its own—the true employment value of HQ2 would extend well beyond that, providing an immense and well-needed boost to the city’s underemployed neighborhoods.

Not all Chicago residents, however, are excited about the prospect of Amazon’s new headquarters. In a November 6 statement to The Gate, the Brighton Park Neighborhood Council (BPNC) criticized Mayor Emanuel’s amassment of funds towards attracting the corporation’s favor at the expense of local services.

“Mayor Rahm Emanuel’s efforts to woo Amazon to the city show that he is capable of finding hundreds of millions of dollars in cash, property, and tax subsidies. Yet he has refused to find new progressive sources of revenue for Chicago’s public schools, which are now working under a budget that bakes in more than $400 million in cuts for just the last two years alone, gutting resources for neighborhood public schools.”

Given Chicago’s precarious financial situation, the BPNC disapproves of spending the city’s funds on Amazon while the school system is suffering extreme funding cuts. 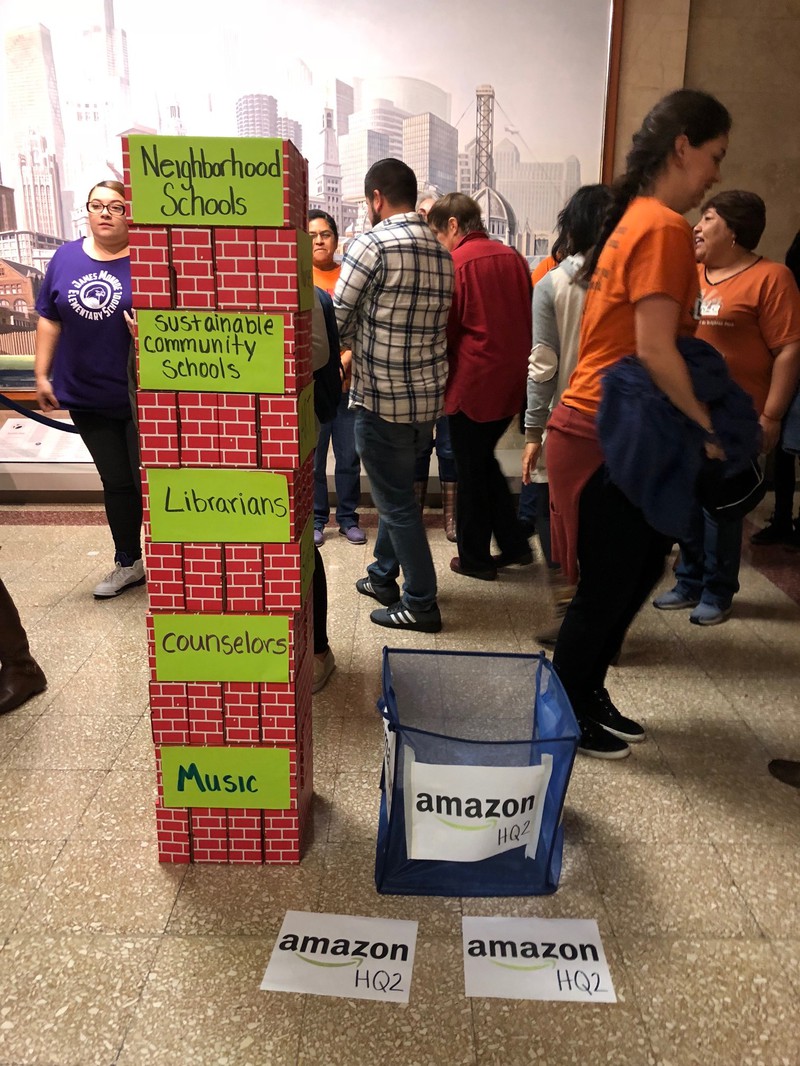 As also noted in their statement, they view Mayor Emanuel’s offering $600 million to renovate the Old Post Office downtown for HQ2’s initial space an especially unwise decision. While Chicago is in desperate need of the cash, the fourth-largest (and quickly growing) corporation in the world has the financial leeway to easily absorb such a cost. In the opinion of the BPNC, “Corporations must pay their fair share in taxes for public services—particularly public education—through initiatives like the reinstatement of the corporate head tax that Mayor Emanuel eliminated shortly after he took office.” If quickly balancing its budget and re-funding its public education system are the city’s top priorities, then it likely cannot afford to attract Amazon with tax breaks or by shouldering construction costs.

If Chicago truly wants to land Amazon, however, these financial incentives are necessary to keep up with competing cities. While Chicago has a lot to gain from HQ2, its unstable fiscal environment may mean it has to sacrifice more to secure it compared to other metro areas like Boston or Washington, D.C. Amazon’s presence would have huge implications for the future of the city’s entrepreneurial success, employment opportunities and public services. But for now, all we can do is sit back and await its decision.

The statement issued by the Brighton Park Neighborhood Council can be viewed here: BPNC Amazon Statement.

The image featured in this article is licensed under Creative Commons. The original image can be found here.

Chase Gardner is a fourth-year Environmental and Urban Studies major and Statistics minor. On campus, Chase helps research climate change's impacts on agriculture and runs for the varsity Cross Country and Track teams. In free moments, he enjoys reading, walking, crosswords, and playing the guitar.

To Expand or Not to Expand: A Government Restructure of the Supreme Court

“Until I Am Released or Dead”: Ahmadreza Djalali and the Detention of Dual Nationals in Iran

On Earth, As It is in the Vatican: Vatican City’s Financial Crisis Looms