This time five years ago, the people clustered on the sidewalk outside Hyde Park Academy High School cast their votes to elect Barack Obama into his second term as president. This year, they marched to demand that he remember them as construction begins on the Obama Presidential Library, clutching posters reading, “The South Side Needs a Community Benefits Agreement” and “Honk 4 CBA.” 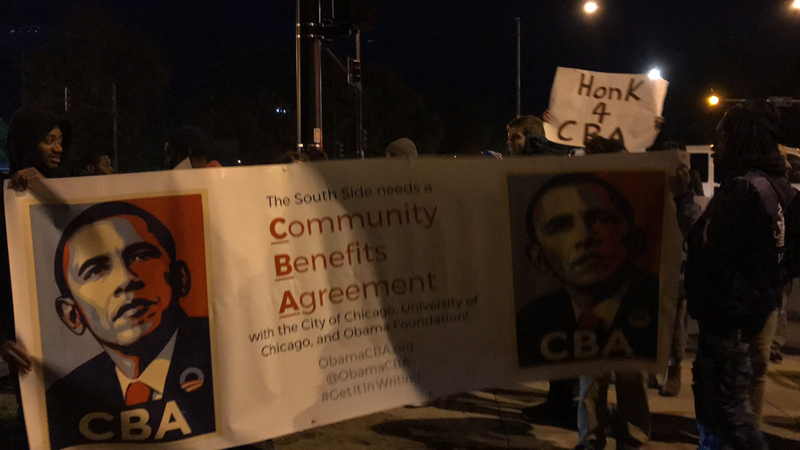 Protesters carry signs to the future site of the Obama Presidential Library.

Davis and the group of community members who gathered around him in the frigid evening were assembled in support of the Obama Library South Side Community Benefits Agreement Coalition. The coalition was created to advocate for the creation of a Community Benefits Agreement (CBA) ensuring that the Obama Library sets aside jobs for residents of the surrounding community, protects low-income housing and homeowners, and supports Black businesses and neighborhood schools.

“Obviously the community needs a CBA,” said local resident Margaret Schmid. “I mean, gentrification is going to drive all these people out of here. That’s a crime.”

Other protesters spoke of the need to keep jobs in the community, and to replace the football field and green space where the library will be built, a space that has served as a sanctuary for neighborhood children for years. Although these may appear to be straightforward requests, a look back at the history of displacement and racial discrimination surrounding development in Chicago, especially surrounding the University of Chicago, led activists to deem a CBA a vital measure to protect the interests of the community. CBAs are legally binding contracts between developers and community organizations to ensure that the community receives important benefits, including work opportunities and affordable housing. The Obama Library CBA Coalition has eight member groups, including the Poor People’s Campaign and UChicago for a CBA.

CBAs have proved effective in the past. The Staples CBA, for instance, compelled the developers of the Staples Center in Los Angeles to hire locally, provide jobs that pay a living wage, and build affordable housing and parks. The CBA includes an assessment of the parks and recreation needs of the community, as well as a $1 million commitment by the developers to meet those needs.

There are recent examples of CBAs in Chicago as well—as dusk began to fall and the protest approached, Charles Perry of the Westside Health Authority and Jobs to Move America told the story of a successful CBA he had just helped negotiate in the Pullman neighborhood. The China Railway Rolling Stock Corporation had received a commission to build rail cars for the CTA, and Perry helped to negotiate a CBA that kept the 175 new jobs created in the community, and allowed them to be open to people with criminal records. 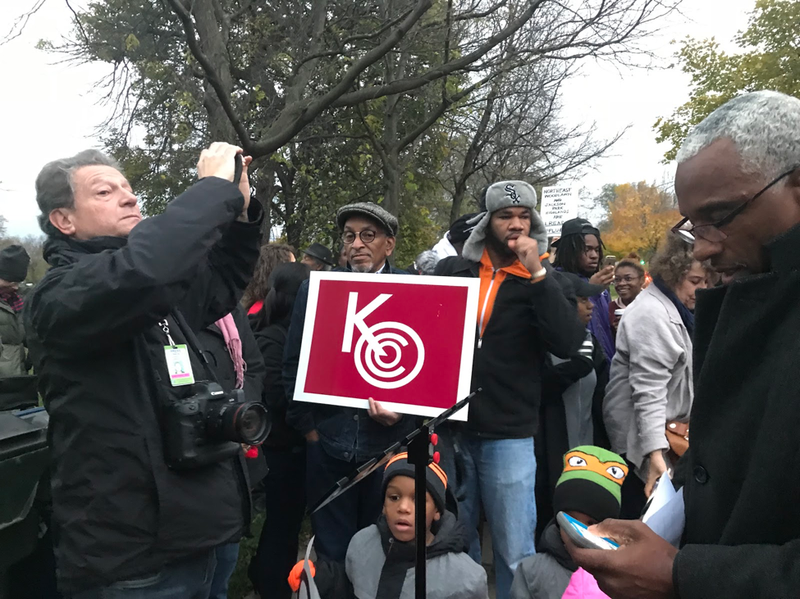 Charles Perry (right) addresses the crowd before the protest.

The answer, according to the Obama Foundation, is that CBAs are typically instated between community organizations and private, for-profit developments, and the Obama Library will not be for-profit. Obama himself has addressed the issue, saying that the library is bringing benefits that the community would not otherwise get, and that the community’s concerns will be heard. However, the Obama Library CBA coalition is pushing to get it in writing. Davis pointed out that the coalition’s demands and protests were in line with the organizing skills and values that Obama himself had learned in his time on the South Side.

“I believe that it is just common sense to contribute to the community. To do what’s right for the community,” said Loretta Cephus, a resident of the community who joined the protest. “I don’t think it’s asking too much. I think it’s being most reasonable. So what’s up with this? What’s the hesitation? I don’t understand.”

After the speeches outside of Hyde Park Academy High School, which had hosted Michelle Obama and Prince Harry only a week before, concluded, protesters marched to the future site of the Obama Library in Jackson Park. Once they reached the intersection of South Cornell Drive and East Hayes Drive, the group, including people of all colors and ranging in age from Perry’s four toddler children to a group of senior citizens joined hands in a large circle blocking all four sides of the intersection. Together, they stood for several minutes chanting, “Whose streets? Our streets!” as a cacophony of honking cars surrounded them, some beeping in frustration, others in time to the marchers’ chants. Two motorists leaned far out of their car windows and pumped their fists in support. 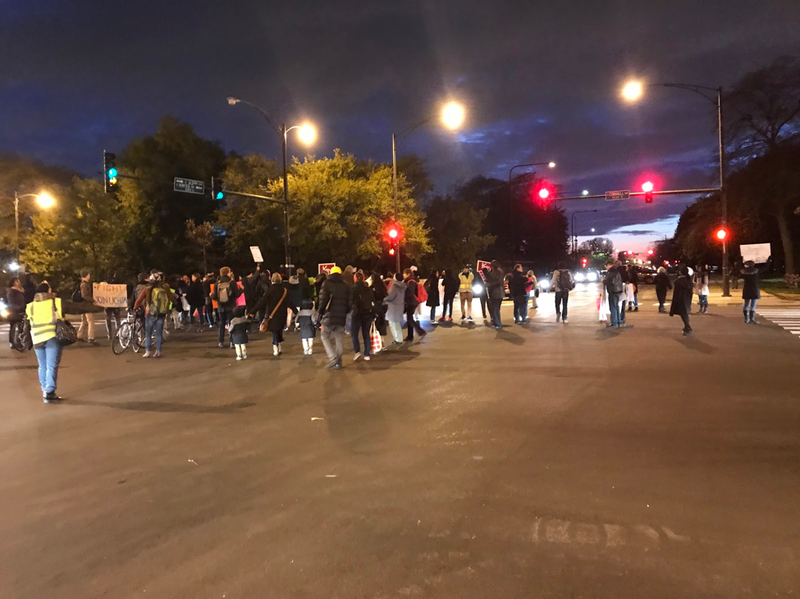 After holding up traffic for a few minutes, the group moved their circle to the park itself for a few more rounds of chanting, then disbanded as groups of friends and community members made their way back home out of the cold.

Throughout the evening, the speakers and protesters underscored that they are not opposed to the library, nor to President Obama’s mission. It is clear that the Obama Library will bring a host of cultural, academic, and economic opportunities to Woodlawn and the surrounding communities; the protesters simply want those opportunities to be available to members of those communities.

“We’re not angry at all,” said Perry, who worked on both Obama’s campaigns and is supportive of the project in general. “We just want to make sure that the people who live here stay here. Development is going to happen, but people should not be displaced.”

The featured image in this article is licensed under the Creative Commons. The original image can be found here. All other images are courtesy of the author.